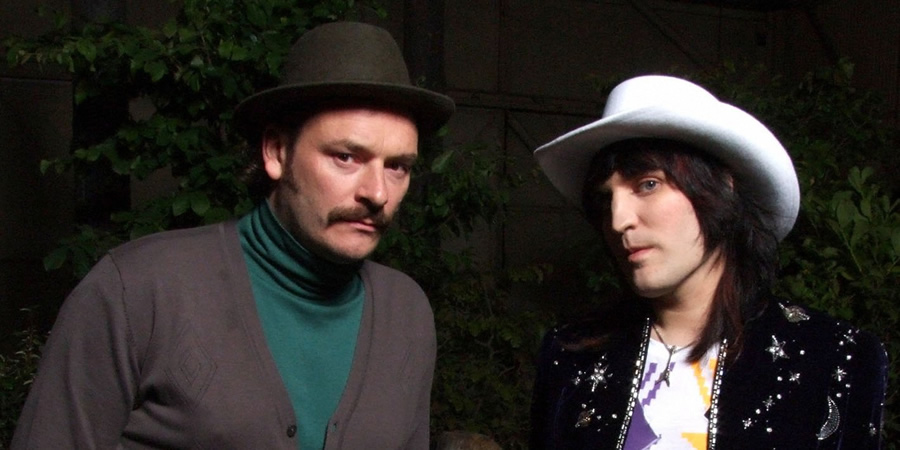 Welcome to the world of The Mighty Boosh - a surreal, irreverent and random comedy.

The Mighty Boosh made its television debut in May 2003 as a pilot on BBC Three. The off-the-wall comedy stars and is written by Julian Barratt and Noel Fielding. The show is best described as "Monty Python meets Pete & Dud with a touch of Vic & Bob."

The comedy's lead characters are two friends, Vince Noir and Howard Moon, who work as zookeepers. All the animals can talk and the basis for the programme is the strange adventures Vince and Howard have in connection with the zoo. The comedy also stars Bob Fossil (played by Rich Fulcher) as the psychotic but cuddly zoo owner.

In one of the episodes ('Bollo'), Howard gets mistaken for a dying gorilla and gets taken to Monkey Hell by a Grim Reaper who has a cockney accent and drives a taxi. Once there, Vince tries to save him by following Howard to Monkey Hell and offering the Ape of Death a haircut. By the time you've watched a few episodes this kind of adventure seems relatively normal!

The real flashes of brilliance in this comedy is found in the interplay and conversational banter between the main characters. Lines such as "Where have you been living Vince, in a cockerels boot?" and "I am the head! Lead me to my hat collection..." are hidden gems within a witty, well-written script.

Howard talks slightly like David Brent from The Office, and Vince is a devastatingly hip and loveable guy. The only actual similarity to The Office is that you'll either instantly love or hate this sitcom.

The series first started on BBC Radio 4, not unlike the hugely popular Little Britain. There are currently three series of the Boosh's TV show; the first was eight episodes long and the second two series, broadcast in the summer of 2005 and autumn of 2007, six episodes long.

The final series saw Vince and Howard working in Naboo's second hand shop in Dalston. Howard, unsuccessfully trying to sell his esoteric jazz records, mainly moons away the hours in delusions of grandeur while Vince laid around in a hammock playing loud music and trying on wigs.

Needless to say they didn't get much work done but this didn't bother Naboo too much, firstly as the shop is really only a cover for his shady interplanetary Shaman business and secondly, he's usually quite chilled out from sampling his own magical herbs and remedies.