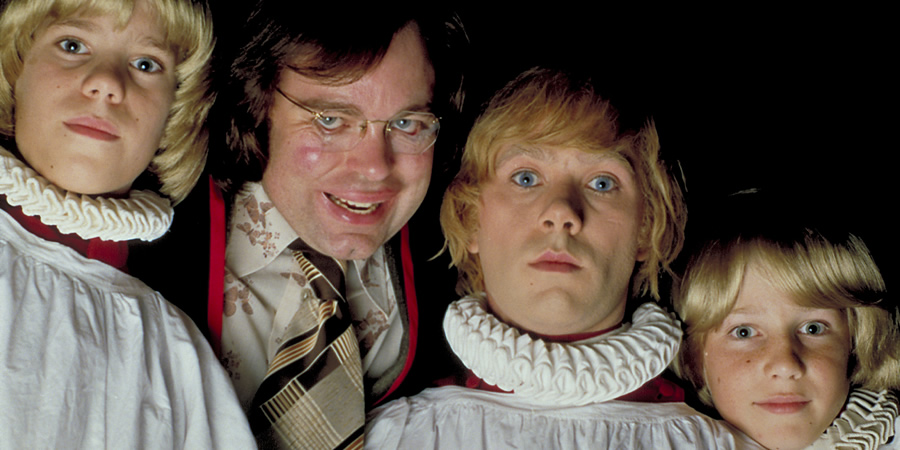 Vicar Bernice has an unforgettable Christmas Eve when she is forced to listen to three spooky Christmas tales told by her parishioners.

It was the night before Christmas and all through the house, not a creature was stirring, not even a mouse... Don't watch this festive offering expecting mince pies and Santa Claus (although he does make a grotesque appearance, courtesy of Papa Lazarou)... welcome to Christmas, League of Gentlemen style!

Royston Vasey's miserable vicar, the Rev Bernice Woodall, is in a typically un-festive mood, haunted by a terrible Christmas memory, when three visitors appear at her church, each with their own chilling tale to recall.

Charlie Hull's bitter marriage to wife Stella has taken a sinister turn. All Charlie wanted was to win the local line-dancing competition, but Stella is having none of it. She turns to Solutions, a coven of local women who help execute revenge on those who have been wronged.

Just as Stella wished it, Charlie's night of glory is the complete opposite, ending in disaster. But tragically for Stella, her lust for revenge has a very high and bloody cost.

An old man arrives to recount the story of his journey to the German town of Duisburg in 1975. There, the young Matthew, a cherubic, blond choirboy lodges with German teacher Herr Lipp and his stern wife Lotte. Matthew spends most of the time fending off Herr Lipp's sad advances, and jumps to a surprising conclusion - Herr Lipp must surely be a vampire. As always in League land, nothing is as it seems.

Just when Bernice thinks it's all over, vet Dr Matthew Chinnery turns up at her church plastered in blood and feathers. He is distraught - he has lost yet another patient. But why is he so bungling at his job? He reveals all to Bernice - and it all stems back to his great-grandfather who, in 1895, was one of the very best vets in the country. Conned by the elderly Dr Purblind, Chinnery fell victim to a curse that would blight his ancestors for generations.

After consoling her parishioners, Bernice finds herself buoyed with Christmas spirit. But it doesn't last for long. She receives a fourth visitor in the form of carnival ringmaster Papa Lazarou, the most terrifying Santa Claus you could imagine. He and his dwarf helpers, who are dressed as elves, throw a sack over her head and drive off with her on their sleigh. It's exactly what happened to her mother many years ago when Bernice was a child!