Erupting onto television during the summer of '78, The Kenny Everett Video Show was an instant ratings grabber, propelling the subversive, impish DJ to the superstardom he had always deserved.

Available for the first time, this set contains all four series and three New Year specials that Kenny made for Thames Television and there's one thing you can be certain of - that it's all done in the best possible taste! 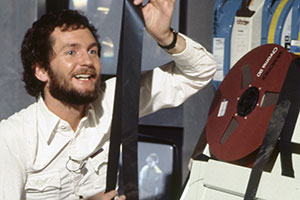 Network is to release all four series of the iconic Kenny Everett Video Show on DVD in November.