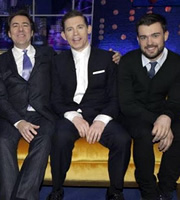 This is the episode in which Lee Evans revealed he was retiring from comedy. Full story

Jack Whitehall was invited back to perform at The Royal Variety Performance. However unlike before, he performed in front of the Duchess of Cambridge, who he once had a crush on as they both attended Marlborough College.

Lee Evans reveals the shocking news of his retirement.