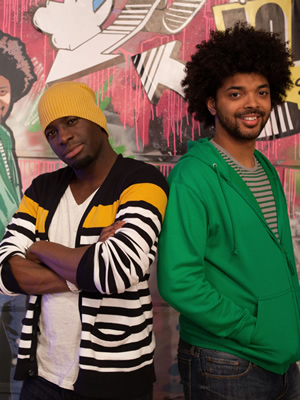 Stand-up comedians Inel Tomlinson (yellow hat) and Johnny Cochrane (green hoodie) star in The Johnny And Inel Show, a CBBC comedy series that combines an interactive studio sitcom element with punchy sketches. Here they talk to British Comedy Guide about how the series came together...

Hi guys. How did you first meet?

Inel Tomlinson: We met on the comedy circuit. We'd bumped into each other a few times but we only got to know each other properly after Johnny came down to perform at my comedy night, Kinetic Comedy, back in 2010. He stormed the gig and I thought to myself: "I gotta get to know this dude".

After a while, you started gigging together?

Johnny Cochrane: Yes, I decided I wanted to do an Edinburgh show with someone, and I had mentioned it to Inel previously, and he said that he was considering going up. In the end he agreed he wanted to do a show and then we went from there. We started to receive loads of compliments about how well we worked together and we both found it encouraging.

Inel: The show was called About Time, and it was part of the Free Fringe. It was unique as, although it was a two hander show, we both remained on stage for the entire duration, jumping in and out of each other's bits - which the audience seemed to love. It had that live spontaneous feel to it which kept each show fresh, as even we didn't know when the other would interject and change a joke entirely.

So how did the TV show come about?

Johnny: Well, whilst we were performing our Edinburgh show a lady who we know, who runs a comedy night and works at Princess Productions, said that she would bring a producer to come and watch us. She did, and the producer liked what she saw, but not just for our individual acts but how well we worked together, so she asked if we wanted to work up a little taster for some broadcasters...

Inel: Yes, they came to see About Time in Edinburgh, they liked the show and gave us an opportunity to develop what we were doing together as a double act. We created a pilot for Princess Productions, sent it to the BBC, they loved it, commissioned 13 episodes, and the rest is history.

What can people expect to see on The Johnny & Inel Show?

Inel: Expect a crazy self-aware comedy show that speaks to everyone. The sketches contain insane characters, ideas and references that I think people have never seen on telly before, let alone children's TV. Plus, guest performances and interviews, and new zany scenarios that myself and Johnny find ourselves in each week. There is so much going on in the show I hope they can fit it all into 30 minutes!

Johnny: I think the viewers will get to see a fresh show, which is fun for all people whether you be a child enjoying the sketches or a parent enjoying the banter. We really wanted to make a show that wasn't just going to talk down to kids and instead would be fun for everyone, with kids given greater credit with regards to their understanding of comedy. I think we have achieved that quite well and hopefully the viewers will feel the same.

It's worth saying it does indeed feel a bit different from other CBBC shows... your production company point out you're inviting kids to celebrate urban culture, but in a very upbeat and good-role-model way?

Inel: We were very conscious early on that we wanted to create an inviting show for the kids that other programmes on telly don't seem to cater for. We wanted to create a comedy show that everyone could relate to, no matter their age, race, culture or gender.

Johnny: I think that we obviously have our own upbringings which will influence what we find funny and therefore what we write for the show. It's just about doing a show which is funny and fun, and has a universal appeal for that reason - if that gets new people in touch with different cultures, well, that can only be a bonus. 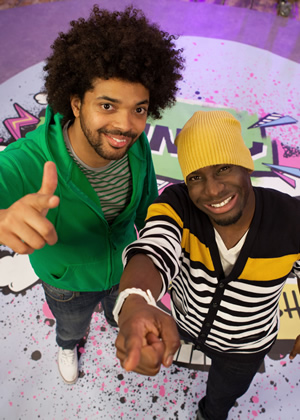 In the first episode you joking argue about who's show it is, but how did you really decide whose name went first in the title?

Johnny: In the end it came down to who was better looking and therefore my name had to go first. No, really I think it was because our characters had to be represented in the show and, I don't know why, but some people seem to think I'm, shall we say, very confident (never!) and therefore it would make sense that I forced my name first, but it doesn't matter really. However, in a lot of the interviews and programme synopsis they keep putting Inel's name first - I am fuming!

Inel: Ha ha. It wasn't a big a deal as we make in the first episode of the show exactly. I think we decided in about 5 minutes!

Some of the show is performed in front of a live audience consisting of kids... which is presumably a bit different from a late night gig. How did you adjust?

Inel: Ha ha, yes, performing to that age group was definitely different to a Friday night show in Bournemouth, so the initial adjustment was making sure we didn't sound like teachers. We wanted to create a show that allowed them to enjoy themselves without having to sit up straight and cross their legs in silence. In the end we found meeting and getting to know our audience allowed them to relax, and allowed us to converse on the same level. So the audience helped us find who we were.

Johnny: It definitely is different to doing stand-up to adult audiences but we both used to work in schools so working and talking to kids is not a problem for either of us. If anything it forces you to be on top form because kids can be ruthless critics.

Talking of adjusting, was fronting your first TV show with full broadcast cameras, crew and everything like that a steep learning curve, or was it easy to get used to?

Inel: It seemed daunting at first, especially the week before shooting, as we had two massive folders full of several hundred pages we had written. Not to mention all the departments were requesting our attention for numerous pre-production things.

Johnny: I think it was a steep learning curve. We were being asked to do and learn a lot in a short space of time, but I think we both loved the challenge. The main thing was not to get too flustered - we believed in ourselves and what we were doing, and the more we showed that, the more confidence it gave to those around us.

Inel: One day in particular I remember playing seven different characters, all with different costumes, make up changes and voices. A lot of pressure, but it was easy to remind ourselves that not everybody gets given their own show and that hard work always pays off.

Well said. As you touch upon, you perform lots of different sketches in the show. Do you have any favourite characters?

Inel: I think, roughly, we play around 25 - 30 characters each over the course of the series, so there were some fun personas we got to take on. For me, it's hard to choose just one, but my three favourites would have to be: Liam Piam, the annoying news reporter; Bearman, for his ridiculous costume; and Blondie, who's personality is so big she just seems to steal every scene she's in.

Johnny: I think we both like the Geeks as they would just completely come alive when we were performing them. Also, as we were being filmed, the whole crew would just start cracking up, so we had to really blank everything out and get into them. Our director was really encouraging us to play around with the characters as well, which gave them even more life.

The show starts on Tuesday. How are you feeling?

Johnny: I think I'd say I'm a little nervous, but more excited. I'm confident that we've made a good show and one that I'm proud of, but of course until it's out there you never know how it's going to be perceived; but, overall, I can't wait and just want to get it out there now.

Inel: Yeah, anxious to see what people think, but, more than anything, I'm really proud of what myself, Johnny and the rest of the production team were able to create. We've been involved throughout the entire process, from coming up with the concept, the writing, and the performing, and although it was a tremendous amount of work to achieve in the tight time frame we were given, I'd love to do it all over again, purely because of how fun it was to make. Everyday felt like Christmas!

Thanks guys! Great talking to you.

'The Johnny And Inel Show' is on the CBBC channel on Tuesdays at 5:15pm, and is repeated Saturday lunchtimes.