In an effort to boost the job centre's figures, Trish calls in a soldier to recruit job seekers, but he generates a very different kind of interest. 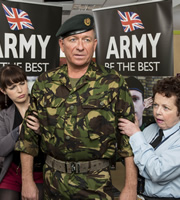 In an effort to boost Brownall Job Centre's figures, Trish calls in the army. Sergeant Steve Fox comes in to recruit jobseekers to the armed forces, and finds himself on the receiving end of a very different kind of interest.

Battle lines are drawn and Trish is going to have to overcome her bad hair day if she wants to get her man.

Meanwhile benefit fraud investigator George goes undercover to trap a man who's signing on and working as a decorator, but things don't quite go according to plan.