Tyler is preparing for his first gig with his band, but he is worried he is going to ruin his credibility by turning up with mummy and daddy in tow. Meanwhile the staff spot a way to make a quick buck. 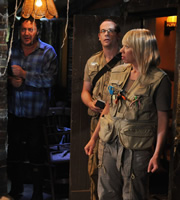 Tyler is preparing for his first gig with his band, Puddle Of Agony. He has booked a venue at the university and Boycie and Marlene are driving him down with all the kit in the boot.

Marlene can't wait to see her son make his rock 'n' roll debut, although Boycie is slightly more apprehensive - but not as apprehensive as Tyler is about ruining his grunge anarchist credibility by turning up with mummy and daddy in tow.

Left alone to look after The Grange for the night, the staff head down to the pub where they get talking to Natasha and Ian, two psychic detectives who are in the area seeking phantoms and ghouls. They work for Paranormal Monthly magazine and are offering a reward of £5,000 for the first photo of a ghost. Spotting a way to make a quick buck, Elgin offers them the run of a 30-room manor house with a haunted East Wing...