Marlene has become fed up with her husband's inattention, and fears that their relationship is nearing its end. She seeks the help of a local marriage guidance counsellor, which proves so successful that she ends up throwing Boycie out, but the parting gives them both time to consider their lives. 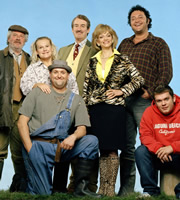 All is not well at Winterdown Farm. Marlene is thoroughly fed up with her husband's lack of attention. She feels unloved, under-valued and lonely. Worrying that their relationship is nearing its end, she seeks the help of a local marriage guidance counsellor, Chantelle, who is also a part time hairdresser. When Boycie finds out she's been discussing their problems with a stranger he is appalled, but this just ignites Marlene's fury and she throws him out.

With the pub being redecorated following a fire, a farmers' convention taking all the space in the local hotel and his car currently parked in a pond, Boycie finds himself homeless. Strangely, his staff don't seem over keen to accommodate him, except Bryan, who generously offers Boycie a place to sleep in his caravan. Not in the bedroom, obviously, as that is occupied by a sick sheep, but he has sleeping bags for them to bunk down on the floor. Meanwhile, Marlene seeks solace in a bottle of wine and a girlie chat with Mrs Cakeworthy.