The adored trio who took 70s comedy to the limits of insanity and technical brilliance. Kitten Kong, Ecky Thump and a bun fight at the OK tearooms: it's all here! 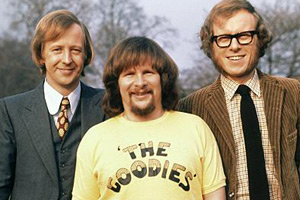 Episodes of The Goodies finally released, via BBC Store

BBC Store has released 15 episodes of The Goodies to buy to download, including 6 never previously commercially available.