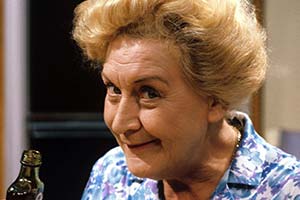 Forthright Ida has had trouble finding employment that suits her until she is reunited with her son and taken on as housekeeper at his flat in Muswell Hill, north London.

Unafraid to voice her opinions (especially those concerning Mrs. Price), her mischievous nature and heart of gold nevertheless make her very endearing.

Known as 'Shane' to birth mother Ida, Robert is a doctor who practises in a nearby hospital. Initially reluctant to accept Ida as his mother, he soon warms to her and treats her as one of the family.

Eventually, Robert takes a new job as a GP in Yorkshire, which means moving the whole family to the north.

Ida's feckless brother, with an inclination towards petty criminality and who has been in and out of prison for years, is actually quite harmless.

Lazy and forever on the scrounge, he often causes problems for his sister and her family, particularly due to his ill-disguised (and unreciprocated) admiration for Mrs. Price.

Referred to as Robert's 'other mother', the woman who brought him up is distinctly unimpressed at Ida muscling in on his affections and makes no secret of her dislike for her.

A terrible snob, she disapproves of everything and everyone - except Robert.

Miss Parfitt is the dowdy and dithering receptionist at the Yorkshire practice where Robert later starts working.

Although efficient when it comes to her job, all other aspects of her life are sadly neglected, and she looks doomed to live forever with her demanding elderly mother.