Skethes include a gangland villain made out of wood, new versions of classic films such as "Posh Jaws" and "Rude Gandhi", and Ted and Peter talk about snooker playing days in "Screw Back in Anger".
Preview clip 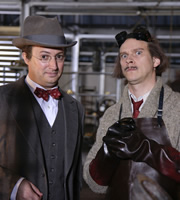 Viewers discover the true purpose of the Giant Death Ray; meet a gangland villain made of wood; and get some dating advice from a man who is "almost Gary Rhodes", as David Mitchell and Robert Webb's offbeat sketch show continues.

This week's programme features clips from exciting new versions of classic films, including Posh Jaws and Rude Gandhi, while there's another episode of The Quiz Show - the post-apocalyptic game show in which contestants answer questions such as "What is hope?" and "Where are all the children?" and everything's fine just so long as the contestants remember never to go outside.

Veteran snooker commentators Ted and Peter reminisce on their playing days in "Screw Back In Anger", and disaster looms again for gaffe-prone office lackey Hennimore. Viewers are also introduced to Captain Todger, a marvellous superhero who happens to be a tiny bit politically incorrect.

There's an argument about the ideal running order for a sketch show and viewers can see how David and Rob can each play two parts in the same sketch by simply existing twice.

Behind the Scenes - Hit and Miss

Behind the scenes on That Mitchell and Webb Look. Robert and David discuss how many hit sketches they should include. "It's a sketch show, it's got to be hit and miss."