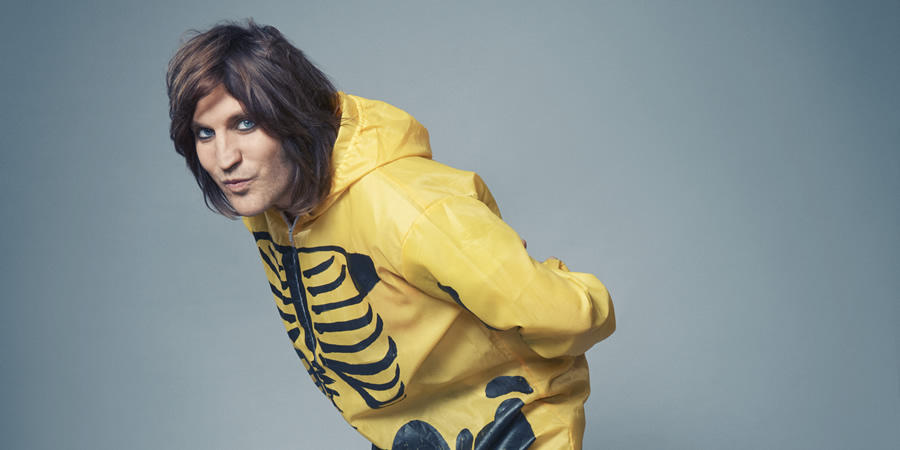 Noel Fielding says he found many of the tasks frustrating.

Why did you decide to do Taskmaster?

Because I think it's a really good show. It's different. You get a bit tired of just doing panel shows - I love panel shows but you have to be funny sitting down for a lot of them so it's fun when you actually get to stand up and do some stuff.

Also, I really like Alex. I hosted Montreal Just for Laughs [in 2010] and he was on the bill so for a week we did a show and I got to know him then, I thought he was great. So that's the main reason I did it. I definitely won't watch my tasks though; I'll watch the others.

I don't mind it but it's a bit weird. I don't really any more. Unless it's something I make - like a crafted weird narrative I'll watch but I don't really watch myself on panel shows. 'Hey, look there's me doing what I always do, chatting away! Like an embarrassing idiot.'

I'll watch this because I'm very inquisitive to know what other people did to see what happened, but I know I've embarrassed myself as well as surprised myself.

How have you surprised yourself?

Just by doing things I didn't think I could do. There was a golf hole on a football pitch and I had to use a pool cue to hit a Babybel cheese and I hit it with a perfect golf swing and I don't even play golf. They were like 'do you play golf?' And I was like 'no!' So that was quite surprising, I didn't think I could do that. Maybe I'll play when I'm older, I like the outfits!

It's sort of calming isn't it golf. But anything that was arty or sporty I was good at and then anything that required logic or a Vulcan like mind, or maths or science I was hopeless at, which I knew!

How do you normally approach tasks - are you generally quite practical?

I'm not a good practical person but I'm quite good at problem solving I think. I'm quite good with my hands in an artistic way. I wouldn't know how to change a plug - I could work it out I'm sure but I couldn't put a shelf up. I'd just be like I have no idea. I'm better at model making and painting; I've done a lot of that stuff so I'm not scared of it. It's confidence with everything really - if you go in thinking you're not going to pull it off, you don't. You have to be positive.

Which were your favourite tasks?

All the arty ones, because they were a little bit like a relief. And also, because I like making stuff. I had to make a portrait out of toilet paper. The problem is, for this show, that as soon as you let it go, that's when you have your best ideas. So, you're sort of tense because often there's a clock so you're going 'what can I do? what can I do?' Then as soon as they say it's over you think 'I should have done that!'

It's insane how your brain just relaxes. I sort of did a self-portrait of myself out of toilet paper and as soon as it finished I thought I should have called it 'Bog-roll Noel' but it's just gone - they go 'it's done' and you go 'argh!'

You just have to not worry about making yourself look like an idiot. They gave you lots to think about while you're doing other things too, which I like because I meditate and I think that's what's quite good about meditation is that you can think about a couple of different things at the same time. So you have something brewing while you're percolating something else.

The whole point is that you're trying to clear your mind of all the rubbish so that all the good things come out. Since I started meditating I've felt I can write stuff while I'm doing something else - all these ideas will come out fully-formed, which my meditation teacher said would happen, and I doubted her!

I went 'I'm not going to have any good ideas anymore!' But she said 'you'll have more, and be able to have ideas while you're doing other things'. I didn't believe her, but now I've done meditation I think that's true. I've been coming up with fully formed things while I've been doing something else, which I never was able to do. It's quite amazing to be producing double the amount, which is still not a lot with me. I need all the help I can get!

Which task were you most frustrated by?

Oh, there were so many. The first one I did I completely panicked and got it all completely wrong. I didn't read it properly and made a tit of myself. But once you make a tit of yourself you've broken the seal and it doesn't matter, you realise it's ok.

I got really upset about the football task because I didn't have any football boots or trainers, and I was wearing these pointy high-heeled shoes. It was really muddy so I couldn't get the ball in the bag with the shoes I had on and I was really annoyed because I'm quite good at football. They were my last gold Terry de Havilland boots; I was like 'I don't want to ruin them for this task'. But I couldn't help but get angry because I was like 'I can do that! It's killing me!' If you have no expectations it's fine but it's tough when you know you can do something. 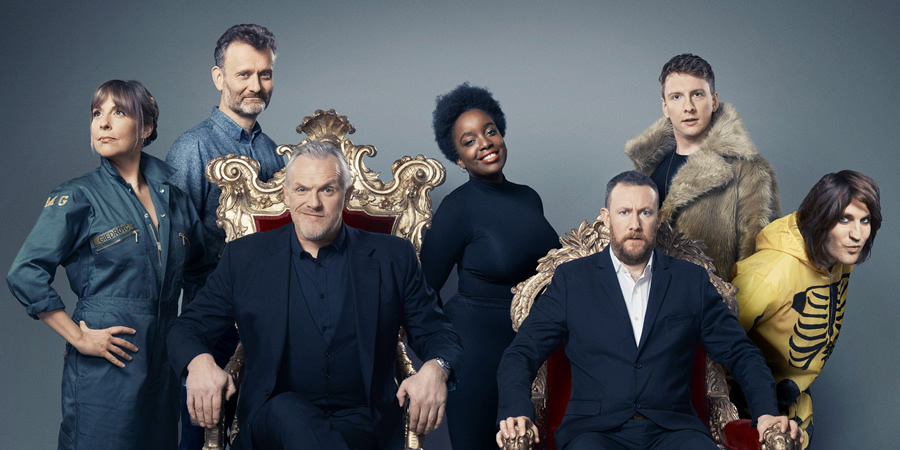 Joe's quite arty too, but then Hugh may be quite sciency, mathematical and logical. I'm pretty sure he went to Cambridge and I think maybe Mel did as well - those people with the big brains. So maybe the academic logical stuff might be better for them. Mel bakes so maybe she's very practical. I've tasted her cakes, they're good. You just don't know how people are going to react. I heard Hugh's quite good at football so he'll be good at the sporty stuff.

You just can't tell can you? When someone says 'destroy this cake in the most beautiful way possible', how is going to Cambridge or art school going to help you? I don't imagine that I've won and I'm fine with that.

What would it mean to you to win?

I don't know! It's a sort of weird thing to win. I'd be nicely or pleasantly surprised if I win. I am quite competitive and it's funny because it brings out all the competitiveness in you. Because I went to art school and had exhibitions and stuff, I'm very competitive when it comes to things like that. But then the things I don't think I can do, I'm not competitive about. When they say 'how many peas can you eat in a minute?', I'm not going to get competitive about that.

You do learn stuff too, like I dropped a bowling ball in to a bucket from the top of a ladder to create the highest splash and I realised that I could create the same splash with a golf ball. So, then it's physics and you go 'I didn't know that'. But, at the time, you're carrying a bowling ball up a ladder, which is obviously quite dangerous - especially for the person holding the ladder! But then you realise you could have just taken a golf ball up. You wouldn't know unless you tried it so you're constantly learning stuff.

The tasks were funny and there was a really nice team of people who work on it so it's like a nice family.

Are people going to see a different side to you?

Yeah because I guess the public don't really know what you're like. Everyone has their own persona; I was talking about this with David Mitchell and we work quite well on panel shows together because he's quite nerdy and academic while I'm quite surreal and sort of rock and roll. We're just completely opposed to each other so we have quite good banter. But on a panel show, it's your character that they're buying in to really, so that is how you get all your comedy.

I guess the public have a perception of you and then they might see this and go 'oh right, he's quite good at that!' It's probably why I was quite annoyed about the football because I thought that would show a different side to me rather than in gold and silver boots wearing poncy clothes.

In your heart, you just want to come across as a nice person really and be upbeat about all the tasks and not moody. It's funny though because everyone has a breaking point and I reached mine on that football field. There's a point where you're just knackered and it's not that you can't be bothered it's just like they've stretched and manipulated you and fucked with you mentally and physically to the point where you literally go 'I'm done! It's torture!'

Do you prefer being in character?

No I don't mind doing it as myself. You can't be self conscious when you're on a panel show because you're just chatting and if you're out of your depth on QI it doesn't really matter if they're talking about logarithms because you just say 'I don't know anything about that'...

But you do feel a little bit self-conscious with Taskmaster because you know they're filming you trying to accomplish something that you don't have the skills to accomplish, so you do feel a little bit embarrassed. But once you let that go, then you become quite childlike I think and that's the key to it is to just have the enthusiasm and optimism of a child and be quite free with it - then it works for you.

On the first day, I was really uptight about what was going to happen and then on the second day I went 'this should just be fun, just go with it'. And then it was better and I felt quite free.

It's a really nice show because you don't do these things anymore. You do them all the time when you're at school and university but then you get a bit safe and you realise how safe you are. You don't take yourself out of your comfort zone and this completely takes you out of your comfort zone, which is nice. It just makes you feel like there are a lot of things you could do.

I sort of now feel like some of the things I thought I couldn't do I should maybe have a go at. I can't drive and maybe it will be fine and like a task. Maybe I'll learn French because my grandma is French and I really wanted to learn it. These things that I didn't think I was very good at because I'm not very practical like driving or good at languages - maybe I should just have a go. Because it's kind of fun even if you don't pull it off...

What I'm really saying is that Alex changed my life. I'm going to be driving all round France next year!