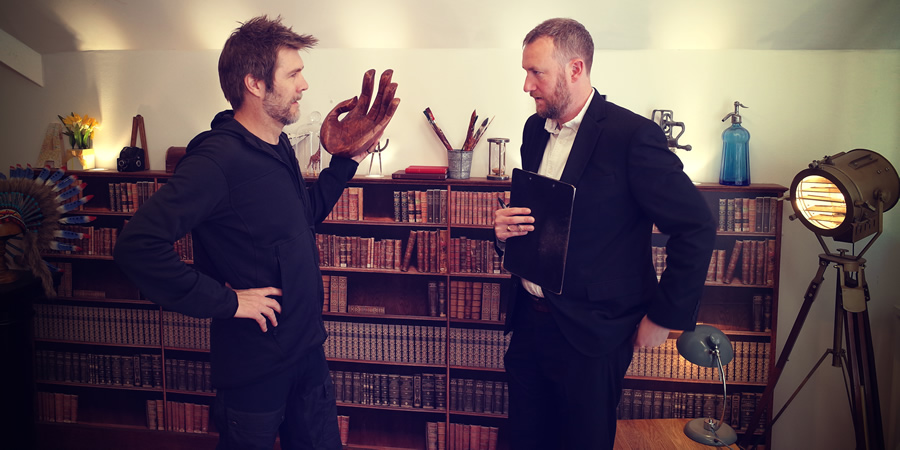 Phil Wang makes sure his outstanding outfit leaves even less to the imagination that it did before, Jessica Knappett demonstrates her mastery of a child's percussion instrument and James Acaster's dream comes true.
Preview clips

Prize task: (In honour of Alex) the creepiest thing.

* Kerry Godliman: A t-shirt she spotted someone wearing on a train, sitting opposite her, which read: "I'm not a Gynaecologist, but ill [sic] have a damn good look for you!" - 5
* Rhod Gilbert: A short film that Rhod sneakily filmed of Greg sleeping. - 5
* James Acaster: The main attraction of the Manor House Museum in his hometown of Kettering: a mummified cat. - 4
* Jessica Knappett: Her collection of creepy Victorian Christmas cards, which include pictures of dead animals. - 2
* Phil Wang: A finger portrait of himself, made by a fan and given to him at a gig in Newcastle. - 1

Task 1: Poke something out of the hole in the roof of this grotto. Least suspected thing poked through wins. You have 20 minutes. Your time starts now.

Task 3: Compose the best 30 second piece of music. You have 20 minutes. Your time starts now.

* Jessica: The Easy Triangles with Here I am - I'm a violin - 5
* Rhod: The Little Matchgirls with The Ballard of the Toothless Goon - 4
* James: Clump Stump with Over my Shoulder - 4
* Kerry: The Hokey Cokey Goodtimes with Having a great time any time - 3
* Phil: Kill Phil with The Yellow Blues (Green) - 2

Jessica Knappett composes a piece of music. Alex Horne helps by creating his own jig to it.

Greg Davies tentatively watches a 'short film' that Rhod Gilbert has filmed of him for the 'creepiest thing' prize task.