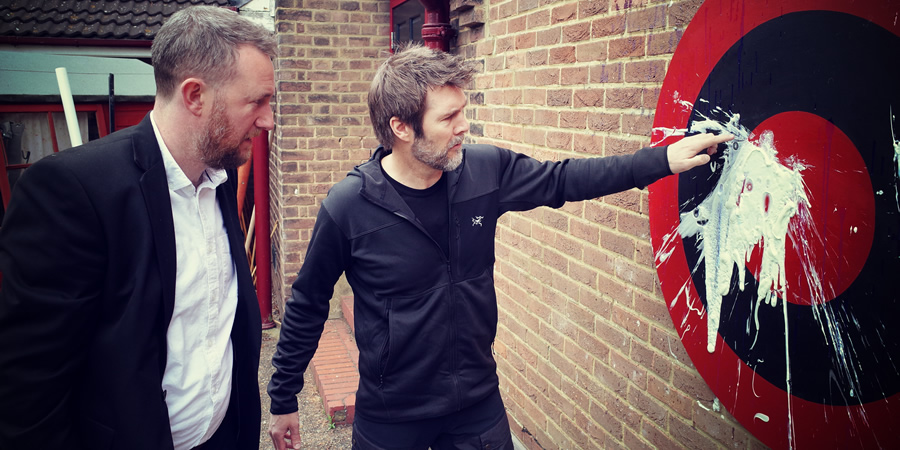 Prize task: The worst present from a named relative.

* Jessica Knappett: From her mother, an outfit she got for her senior school disco consisting of a feather boa and purple opera gloves. - 5
* Rhod Gilbert: From his wife, a ceramic candleholder that Greg got for Rhod's wife two weeks earlier. - 4
* Kerry Godliman: From her mother, dream-catcher yin-yang earrings. - 3
* James Acaster: From his then five-year-old nephew, a calendar he made himself, complete with jokes for every month. - 2
* Phil Wang: From his sister, some used toilet paper. - 1

Task 1: Deliver this task to Alex in the most spectacular way. Alex is in his caravan. You have one hour. Your time starts now.

* James: Plays music, pours confetti on Alex, launches fireworks, has a man dressed as Father Christmas dancing, and gets Richard Osman to hand over the task to Alex . - 5
* Rhod: Sticks the task on a javelin and throws it at the caravan, with Alex still inside the caravan. - 4
* Jessica: Sends the task in a basket lifted by balloons. - 3
* Phil: A woman wearing a Taylor Swift mask opens the window, then Phil turns the task into a paper plane and throws it through the window. - 2
* Kerry: Singing and dancing around Alex with a group of other people. - 1

Task 2 (Team Task): Make as many white circles on the target as possible. You must not step beyond this rope. You must not move this rope or the target. Phil has 20 minutes. Everyone else has 5 minutes and their scores are combined.

Task 3: Cheer up this former traffic warden. You have 20 minutes. Your time starts now.

Task 4 (Team Task): Make yourselves look as little or big as possible. You have 20 minutes. Your time starts now.

Jessica Knappett reveals the worst gift she was given by a named relative, which hindered her experience at a school disco...

Phil Wang makes a wangtastic pun which Alex decides he'd like to pass off as his own.