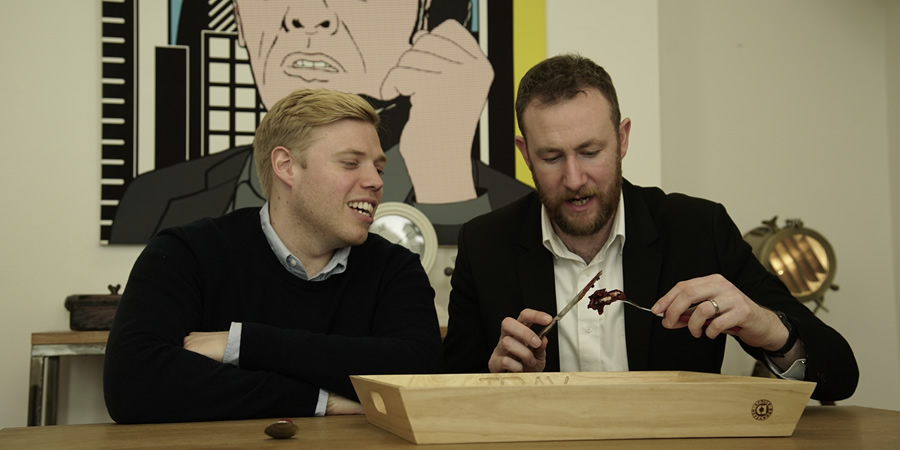 As the series reaches its midway point, Greg Davies's onslaught of tasks don't get any easier. When Al Murray is confronted with an eggcup he goes to extreme lengths to maximise his point potential and Sara Pascoe takes a simple loaf of bread, a few balloons and swiftly becomes one of the greatest sporting minds of our time.
Preview clip

Task 1: Fill this eggcup with your own sweat. Most sweat wins. You have 20 minutes. Your time stars now. [Rule only for Rob: You must complete the whole tasking speaking in an accent different from your own.]

Task 2: Make the best domino rally. You have one hour. Your time starts now.

* Dave: A selection of gifts based on Greg's hometown of Wem, namely the book The Story of Wem, the programme from Wem Town F.C.'s biggest game, a bottle from the Wem brewery, and the single "Wem" by Howard Carpendale. - 5
* Rob: A footstool to match Greg's throne. - 4
* Al: £20 worth of the last Rolo. - 3
* Paul: The game Twister. - 2
* Sara: One page of script for Greg's sitcom Man Down written by herself. - 1

Live task: Anchor these balloons using only bread. The person with the most fully inflated balloons resting on their mat and held down by bread alone after 100 seconds wins.