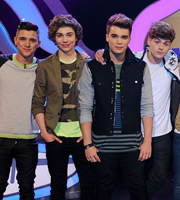 The previously pregnant Rochelle Humes gave birth in the week of this episode's recording. Her regular spot was taken by fellow 'Saturdays' member Frankie Sandford.

JJ from Union J gets waxed

Find out which one of the boys from Union J is brave enough to have both of his arms waxed by Grimmy and his fellow band mates.

Grimmy tests the panel to find out which Saturday they prefer - Rochelle or Frankie?