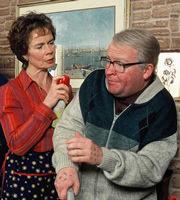 The boys' pal Bert is in a terrible state after the death of his wife. It's familiar territory for Jack and Victor and they're keen to get Bert back on track. Winston's also in need of some female company. Could a home help be what he's looking for?

This episode was broadcast outside of Scotland on BBC Two on Thursday 17th July 2008 at 10pm.