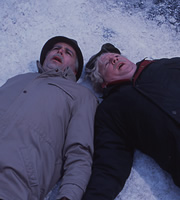 It's a winter of discontent for the boys, the pavements are like an ice rink and the wind would take the face off you. Jack is chittering but Victor refuses to switch on the electric fire. So why is their pal Winston turning up the heat?

This episode was first broadcast UK-wide on BBC Two in 2004.