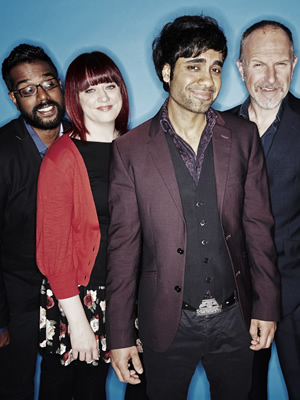 The fifth series of Stand Up For The Week sees three new comedians installed alongside host Paul Chowdhry and regulars Josh Widdicombe and Seann Walsh. Below we talk to Angela Barnes, Simon Evans and Romesh Ranganathan to see if they're ready...

Hi Simon, Angela and Romesh. Congratulations on getting the SUFTW gig. What are your thoughts on joining the team?

Angela: Thank you! I'm very excited about joining the SUFTW team. I'm pretty nervous too, got some big ol' clown shoes to fill, but I'm mostly looking forward to it.

Simon: Bloody terrified. Still, a bit of terror is good for the heart.

Romesh: It's much less about joining a team for me as it is for finally getting a regular opportunity for my talent to shine. If other people benefit too, then that's great too. But I don't really give a shit about the others.

Ha ha. Do you have a particular area you'll be focusing on?

Romesh: I'm doing sports. Bringing that comedy heat on all things sporty. And hoping to God that something interesting happens.

Angela: I will be talking about First World Problems. I get to focus on those news stories that really wouldn't be top of your list of priorities if you weren't living in a smug western society.

Simon: I'm comedian without portfolio. I am encouraged to simply be scathing from a position of unassailable social superiority about whatever topic crosses my radar (a radar is like a gaydar, but for ships).

Like a newsreader, are you secretly hoping for bad things to happen in the world over the next eight weeks, so you've got plenty of topics to talk about?

Angela: Oh God no! I'm praying for funny things to happen, or things where I can find some funny. I can be mean, but I've not got to the point of wishing ill on the world so I can write jokes about it. Not yet anyway, give it a couple of episodes...

Simon: You don't need to hope for bad things to happen, bad things happen all the time, at least from our anthropocentric point of view. You just have to hope that the crowd have heard about them and don't think you're making them up. And also that they have the stomach to find them funny.

Romesh: If David Beckham suddenly announced that he was undergoing surgery to become a black man that would really help, as I have already written stuff on that just in case... 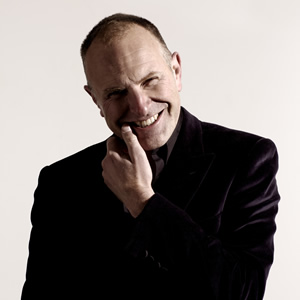 Coming up with top quality new topical material each week is quite a big ask... is that process going to be new to you?

Simon (pictured): It is a massive "ask". I have never delivered ten new minutes every week for eight weeks, which is the core challenge. But when I have tried to deliver topical material - appearing on The News Quiz or, some years ago, writing and performing on The Way It Is (a Radio 4 spoof news programme, a sort of topical On The Hour) - I did find it exciting and genuinely bracing. Only time will tell if I can rise to the challenge but I have a good team, I'm ready to give it a crack.

Romesh: I know what doing the show is like from talking to Walsh [Seann Walsh], but nothing prepares you for the experience really.

Angela: It's a completely new world to me. There isn't really anything else quite like it. In topical panel shows, you are in conversation with other participants. In this show, you are alone, on a stage, doing material that you have written that day. That's a pretty scary prospect. Actually, I feel a bit sick thinking about it... I'm looking forward to it though. I'm looking at the next 8 weeks as a sort of comedy boot camp. At the end of it, I hope to be a much more confident writer and performer.

SUFTW has a reputation for being edgy at times... do you think all topics are suitable for joking about?

Simon: I don't think any topics are off limits but I do think you have to get your angle clear in your head before you start talking and make sure the audience understand who the butt of the joke is.

You have to ask yourself if the point you are trying to make is worth getting into the territory for. I learned a valuable lesson a few months ago when I felt I had valid things to say about the hideous atrocity in Woolwich but, in the end, I couldn't nail the point without making people feel angry that the event was being mined for humour, and I had to drop it. Not to have done so would just have been pig-headed and egotistical. Perhaps a better comic, or one with a different perceived persona, could have got where I wanted to go, but I have yet to see a single comic tackle it.

Romesh: I think comedy can talk about whatever it wants to, and we can let audience reaction be the judge of what is acceptable and what isn't. But I would never joke about paedophilia. Unless the joke was good.

Angela: I think it's different for different people. I know that I wouldn't be comfortable making jokes about something that I couldn't defend. I used to work in social services - the right on voice in my head shouts pretty loudly! The Archers though, that is sacred. Joke about that and I will end you! 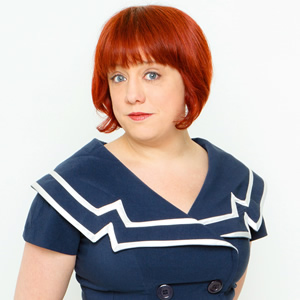 Ha ha. Do you ever pause and take stock of how your career has changed over the past few years?

Angela (pictured): God yes, all the time. I'm not really sure how any of this happened. I was 33 when I did my first open spot, so comedy isn't something I always knew I would do. Things have moved very quickly for me, I am constantly expecting a tap on the shoulder and somebody saying "I'm sorry, we've made a terrible mistake. As it turns out, there's no way you're a comedian."

Simon: Only two or three times a day for me. Mainly trying to work out where it is, and where it going. It is a very hard thing to judge for yourself and almost certainly no healthier than it is to spend time staring into the mirror, but it can be habit forming.

Romesh: I don't. It's not about taking stock. It's about pushing on to the next level, and making this hay while the sun shines. Getting that scrilla. Picking up fans while I can and get as much fame while I'm still on the up, so that I have enough money when it all goes away to buy enough anti-depressants to see me through the years alone in my house after everyone's left me.

So if you weren't a comedian, what job do you think you would be doing?

Romesh: I'd go back to teaching. I'd have to deal with the smirks of pupils and teachers who'd know that I'd chased my dream and failed. Their voices would express sympathy but their eyes would contain delight. And then, one day, I'd find a gun. But ideally, I'd like to be a rap star. I used to do some rapping. I was excellent. I put out a mix tape that sold 28 copies in Horsham.

Simon: Not much of a switch, but what I really always wanted to be was a professional humorist in print. Alan Coren was my hero growing up, and then Douglas Adams, and then men that had inspired them like Perelman and Wodehouse. Hopefully one day I will make that switch. I still perceive it as a more dignified existence than monkeying around on stage. My other brief flirtation was with the criminal bar but I dodged a bullet there, I think.

Angela: Well, I have worked in many roles in health and social care, so I suspect that that is where I would still be had comedy not swept me away. I think my ideal job would be to work in a second hand bookshop. One that isn't too busy, so I could sit and read Penguin Classics and other yellow-paged tomes all day. 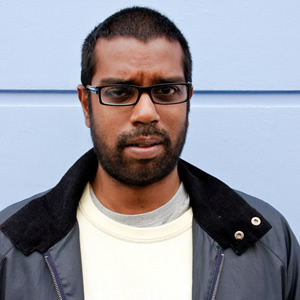 This TV series takes you right the way up to Christmas. What are your plans for when the series has finished?

Romesh (pictured): There's nothing going on for me in 2014. Which basically means we can't really enjoy Christmas because who knows when the next pay cheque is coming in? I can't buy my son a bloody tablet for Christmas if we have no idea if we're going to have onions in February. So Christmas will be spent taking stock and reflecting on how unsure the future looks.

Simon: Over Christmas I am largely at the beck and call of my family. There is usually a furious sequence of negotiations as to who will host etc. I find Christmas 98% tiresome frankly. All the joy seems to have been torn out of it by commercial interests of one kind or another. Wishlists on Amazon and people just detailing to each other what they'd like and so on, I am a complete Grinch I'm afraid. I don't think the real meaning is about Christ, let me emphasise. I think it should be about feasting and song and good cheer and banishing the gloom but it mainly seems to be about broken plastic and absent batteries. My favourite ten minutes in the last five Christmas days were swimming out to sea in my wetsuit and bobbing around in the Channel as the sun went down while my father in law, who shares my despair, walked his dog along the seafront. When I came back up the beach I spoke French to observers, attempting to convince them I had swum from Dieppe.

2014 is promising to be exciting though, as I will be touring my recent Edinburgh show, Leashed, and writing and presenting a new four part series on Radio 4 called Simon Evans Goes To Market in which I try and make investment funny and interesting. Wish me luck!

Best of luck indeed to all three of you in regards to your general plans, and the next 8 weeks of the show. Thanks for your time!

Stand Up For The Week returns to Channel 4 on Friday nights on 1st November at 11.05pm.