Roisin Conaty performed a stand-up set as part of Russell Howard's Comedy Central show. She talks about this below... 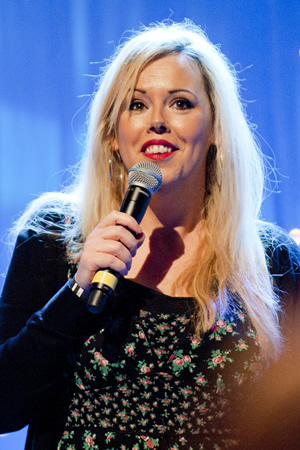 Hi Roisin. Did you enjoy your performance on Russell Howard's Stand Up Central?

It was really fun and the venue was really good. It was nice to see all the acts who were on with me. I am from Camden so it was nice - although last time I was in that room I was arguing with my sister about getting a falafel!

It was good fun; I have known Russell for a long time. I did my first ever TV appearance on Russell Howard's Good News, he is just a really nice talented and supportive guy.

It was a stand-up show that looks and feels good. All of the other great bills on the show made me excited to be a part of it; although I hate the word, it is definitely 'fresh'.

The room was laid out so nice, and it was a perfect size for these sorts of gigs! I don't have any complaints.

I didn't have a plan really, I always loved stand-up but I was naïve about it all. My friend put my name down at the King's Head in North London so I did that. I went into it without any plan or knowing I would do it again - that's why I could do it, because I wasn't over thinking it. It was very softly, softly...

My first gig went well and then, that's it, you are in love with the stand-up monster!

Which comedians have influenced you in your career?

I wouldn't say influenced, because that implies I could be nearly as good as them, but the Americans I would say Richard Pryor, Joan Rivers; and over here Daniel Kitson, Tommy Tiernan... oh I don't know, all of them!

Do you have any tips for up and coming stand-ups?

I would say, record yourself early doors... always record every gig and listen to it after. Get as much stage time as possible and then write it all down! Find the way that works for you but any way you can watch yourself back and find your strengths then that's best.