Jas has a mega-crush on Lily's older brother, Jason, though she'd never admit it.
Preview clips 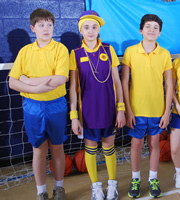 Jas has a mega-crush on Lily's older brother, Jason, though she'd never admit it. When Jason and fellow sixth former Sophia organise a charity basketball tournament, Jas signs them all up to it in an effort to impress him and hang out together. Lily, Martha and Ollie are horrified - 'we don't do sport', cries Ollie!

Against the odds, Martha discovers she has an amazing natural talent at shooting hoops, starts hanging out with the cool basketball kids and joins their team. Meanwhile Lily, who can't catch to save her life, tries to avoid revealing her lack of sporting prowess to Matt Furnish and embarrassing herself in front of him.

In the end Martha realises she has nothing in common with the basketball kids and gets exasperated by the cool new nicknames they keep trying to give her. She's missing chess and spending time with Ollie and her friends.

Jas is distraught when she realises Jason and Sophia are actually going out with each other, but in the end is big-hearted and wishes Jason and his new girlfriend all the best.

When Martha returns to play on her friends' team they put up a good fight in their match, inspired by the unusual 'pouncing tiger' technique Jas's dad Mr Salford has taught them!

Martha's unrecognisable! She's joined the cool gang to shoot some hoops, will this impress Zak?

This is the moment Lily has been waiting for - her and Matt share a kiss!