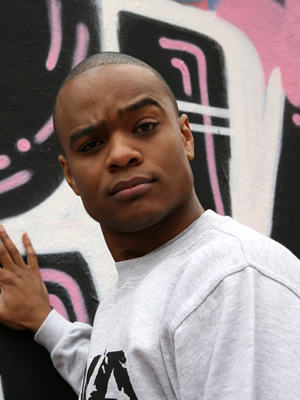 We talk to Sniggers With Attitude star Jason Lewis about the journey he has taken to bring his sketch show to TV:

Hi Jason. Could we start off by asking you to describe your comedy background?

As a child of the 80s, I watched anything and everything comedy. My taste ranged from he likes of Laurel & Hardy, Jerry Lewis, George Formby to Bill Cosby, but ultimately my favourites as a child were Richard Pryor and Eddie Murphy. If it hadn't been for Pryor I might not have been doing comedy.

As a teen, Chris Rock's stand-up blew me away, as well as John Leguizamo's Freak one man comedy, but it was Dave Chappelle's Chappelle's Show where the penny finally dropped.

I had been doing drama at this after-school place in north London called The Anna Scher Theatre, and that place had allowed me to express myself and unlock characters I had inside of me who were dying to come out and play. But after watching Chappelle's Show and becoming disillusioned with the lack of people who looked like me on TV, I decided to join forces with my younger uncle, then an aspiring director, and shoot a sketch comedy DVD. The sketches were very Chappelle-esq at the time, but that was my inspiration.

I am a big Jimi Hendrix fan, so when I needed a name to call my show I named it The Jason Lewis Experience. I started doing stand-up comedy around the same time (early 20s), so it all helped. When we finished the DVD, we would go to the clubs and hand them out like flyers after people left. I would go on Facebook and offer to send people my DVD for free, all off my own back, just so I could spread the word. Then we uploaded the footage onto YouTube. It did well online, but my first video that went viral was a musical parody called Blackboys. After that video everything changed. People took note: blogs, radio, news media - we were completely caught by surprise. Around the same time I landed myself an MTV show by spoofing an MTV commercial and sending it into their head of programming.

You also got a series of BBC videos. How did that come about?

I had been touted to the BBC by a producer called Nana Hughes, who was working inside the comedy department at that time. They recognised I had a good online audience, and were impressed by some of my MTV sketches, so I guess they decided to take a chance on me by commissioning an online pilot, which was then followed by a full TV pilot. Whilst that was happening I began getting parts on popular TV shows, so that helped.

Do you have a favourite from those BBC sketches?

My favourite BBC video is probably the Nanny Discipline sketch, because I never thought in a million years BBC would like that sketch. I wrote that a few years prior and it was only suggested because I was short of a few ideas for the online pilot.

When we shot that sketch it was so much fun to do. The crew couldn't stop laughing and, to be honest, the footage that was cut out was almost just as funny as the final edit. It's the first character I did that has pretty much been universally liked be people of all ages. So she will features in SWA if we get a series.

So, yes, SWA - Sniggers With Attitude - could you tell us more about what viewers can expect from the pilot?

With this show our aim was to have something in there for everybody, whilst sticking to our formula. 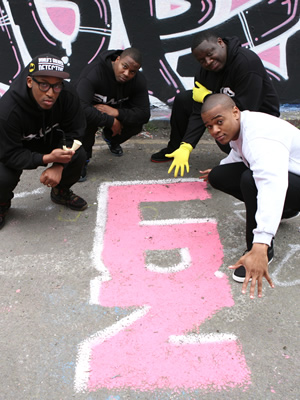 You've got some great supporting talent involved too. Did you know Marlon, Funmbi, Ola and the guest stars before it came to shooting the pilot?

Throughout my journey thus far, I've been lucky to be surrounded by good people. I've known those guys for many years now. I've probably known Daniel Kaluuya the longest out of everyone (since around 2006). But its always good to have like-minded, talented people who support what you do. Makes my job easier as well!

Have you learnt anything along the journey, from the BBC pilot to the London Live show?

Yes, I have learnt a hell of a lot so far, especially over the past few years. And I'm better at my craft because of it.

The best part of working with London Live is that I have finally found a channel that is happy for me to do the show that I want to do. Sometimes you can get lots in notes from others, to the point of where you don't even recognise your work anymore. When you have people who believe in what you do, it makes so much difference to the project. And I can honestly say that, in my opinion, the new pilot with London Live is a lot better than the BBC Three pilot... and we didn't have anywhere near the BBC budget, so I'm very proud of that.

Has it been frustrating process getting your vision on to television?

It has been challenging getting my own project on TV. Very challenging. And the higher you aspire to be, the more obstacles appear in your way. But having a successful career in this industry isn't a sprint, it's a marathon. I have a strong belief in what I do and the journey I'm on.

Things can change very quickly and you need to be ready and prepared when it's your turn to move forward. I've had a lot of good luck and quite a lot of bad luck, but you have to stay focused and determined to succeed. And I am relentless, I don't know any other way.

It might be that, when I did my BBC pilot, I simply wasn't ready, so you can't afford to be bitter, you just have to learn from past experiences and do better in future, so that you leave them (the broadcaster) with no choice but to commission your show. 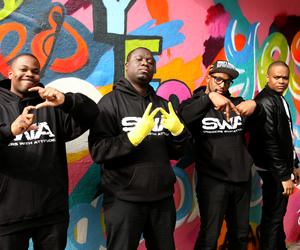 Good answer. London Live is supporting a notable number of urban comedy shows. Lenny Henry has recently spoken out about there not being enough 'BAME' [Black, Asian, and minority ethnic] people in creative industries. Do you have any thoughts on this topic?

Well first of all - maximum respect to those shows you are referring to - but I am not one of those Urban comedy shows. I never liked the term 'urban'. Too many labels are put on things in my humble opinion. I don't do urban, BAME or black comedy I simply do 'comedy'. People like Daniel Kaluuya, myself, Funmbi, Ola, Marlon etc are actors/performers who strive to simply be good no matter who our audience is. My goal for SWA is for it to just be a funny sketch show that happens to have black people in it.

With regards to the Lenny Henry Bafta speech, all I can say there is: Switch your TV on and channel flick and tell me what you see... go ahead, do it... no matter what any exec of any channel says, the TV (in this case) doesn't lie. There are hardly any 'BAME' people on TV and shockingly even less behind the scenes.

Commissioners are typically white middle class males and some of those are generally out of touch with their audience. That, for me, is the sticky part: because many of them are completely removed from their audience they end up making quite a few shows with people who tend to reflect them (commissioners), as opposed to the actual audience.
If you don't understand youth culture or whoever your target audience is, bring in someone who does so you can better understand your audience and then cater for them. But the reality is, until it affects broadcasters financially, nothing much will be done to change this because they don't want it to.

During his Bafta speech Lenny Henry spoke of the show Luther, starring the award winning Idris Elba - This is a show that is critically acclaimed and watched by millions. Lenny noted that Idris plays 'an intellectual troubled maverick cop who has no black friends or family'. None whatsoever. Not a single one. Where in reality does this happen? No black family? And this show is set in London, the same London where the BAME population is well over 40% - yet no broadcasters seem to publically have an issue with this... That alone is funnier than any joke I could ever write.

Returning to your breakthrough Blackboys video... how much of the message in that would you say is still relevant today?

Most of it, if not all of it, is still very relevant. Like any community we have our good points and our not so good points. I grew up around the 'not so good points' so I decided to address that using comedy. I got praise and criticism for that video, but I stood by my work and, if need be, I could defend every single line in that sketch... Because everything I said in there was true; I had witnessed it, it happens in our communities up and down the country. But that taught me that not everybody likes to hear the truth about themselves, even in a form of a joke. But I don't discriminate, I simply write what I know.

I had a guy I know tell me "Bruv your Blackboys video has just set black people back, you've just made us black people look stupid." And I replied "Hold on a minute... you sell drugs!" Can you believe that? A drug dealer is telling me I let my race down... with a comedy sketch! Meanwhile, he can poison our community with drugs, and it's ok in his mind. That attitude still exists today, and that's why my Blackboys sketch is very relevant.

Back to the TV show: Presumably, given the chance Jason, you'd be up for making a full series of SWA?

Yes indeed. All I can say is that, if we do a series, it will be bigger and better, funnier, more characters, and observations. For me SWA will have something to say as well as being funny and I really hope people enjoy it!

Any other projects on the horizon?

Yes there are, but I don't like to talk about that until they are ready to be on your screens. All I can say, for now, is 'watch this space'.

Sniggers With Attitude premieres on London Live on Friday 18th April 2014 at 9:30pm.