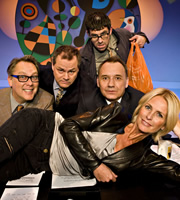 The hit comedy panel show hosted by Vic Reeves and Bob Mortimer with regular team captains Jack Dee and Ulrika Jonsson is back for a new series.

Trying to keep up - and keep the scores - is last year's regular guest Angelos Epithemiou, who adds his own unique humour to the proceedings.

During the show Linda receives a very special massage from Vic, an A-list Hollywood star pays a passing visit and Angelos presents the first of his special variety showcases - something not to be missed!

In an effort to woo Linda Henry, Vic Reeves offers her a relaxing massage but all isn't what it seems.