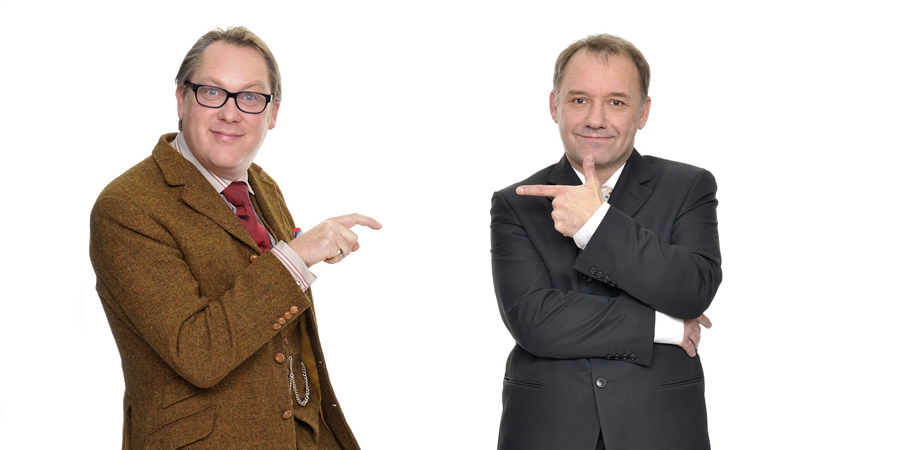 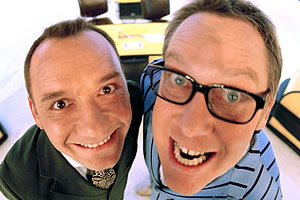 That song (or a slight variation) is sung at the start of every episode of what must be the most surreal panel show ever created. Well, we say panel show... in reality, Shooting Stars is less a panel game, more a vehicle for the surreal humour of Reeves and Mortimer. As Danny Baker once said, the guests on this show are little more than 'stooges in a sketch'.

Shooting Stars is the show that gave Britain a dove from above, a really big baby, an unhealthy amount of thigh-rubbing and posed such difficult questions as, 'what would win in a fight between a steel octo-bear and some sort of strange man fungus'?

The Back Story & Pilot 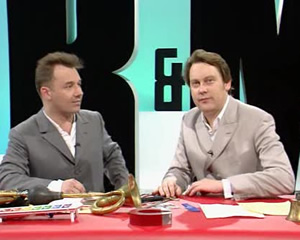 Before Shooting Stars, Reeves and Mortimer had worked together of two other series: Vic Reeves Big Night Out and The Smell of Reeves and Mortimer. Having just completed a second series of the latter, the BBC were keen to reap the benefits of the duo's resounding popularity and so decided to dedicate an entire night of programming to them. This consisted of a mixture of new material and some of their favourite episodes of other shows. The most significant thing to come out of this night was a pilot for a new show, Shooting Stars.

This half-hour featured Jonathan Ross and Danny Baker as the team captains, and Ulrika Jonsson as a guest panellist. There was no scorekeeper, but there was a judge: Uncle Peter from The Smell of Reeves and Mortimer (played by Charlie Chuck). And in the intro to this pilot, the hosts literally shot stars (they had brought guns with them and aimed at the celebrities, but ended up shooting a pig backstage). 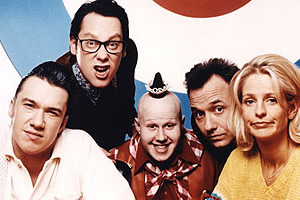 The BBC were so impressed with the episode that they commissioned a full run of the show. Jonathan Ross and Danny Baker were dropped in favour of Ulrika and 50's Throwback Mark Lamarr.

Prior to the pilot, Jonsson had come to Vic and Bob's attention when appearing in the 'Gotcha' section of Noel's House Party. They thought her seriousness throughout the prank that was played on her, made her ideal to also appear in their show 'which has no point to it'.

Lamarr meanwhile had just finished presenting The Word, and it was felt that his somewhat aggressive and grumpy attitude would heighten the tension in the studio and work against the hosts.

A scorekeeper called George Dawes was also introduced (played by Matt Lucas). This scorekeeper was quite literally a big baby who, when giving the scores, would play the drums wildly and then deliver a surreal sentence. It was originally planned for George to wear a nappy, but Lucas refused and thus the now famous pink romper suit was used instead. 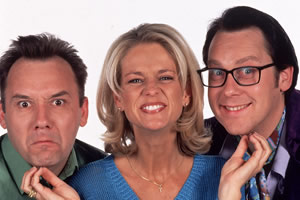 Reeves and Mortimer are the focus, regularly making jokes at the performers' expense. These range from in-jokes (such as fifties references aimed at Mark Lamarr and Vic rubbing his trousers at the female guest sitting next to him); to bizarre challenges (such as Cannon and Ball in a maverick round). The presenters also regularly argued with one another and engaged in slapstick fighting, which would often involve silly props like a giant cheese grater.

Each Shooting Stars team has three members, one of which is the team captain. Normally the guest on Team A sitting nearest to Vic is an attractive female - this is so that Vic has a target for his seedy thigh-rubbing.

During the inital three series, Shooting Stars formed a number of memorable in-jokes. These included Reeves and Mortimer hitting each other with frying pans, Mark Lamarr being labelled a conman, Ulrika taking ages to choose categories for questions, Vic's bad jokes before the Dove From Above round, and the club style song in the impressions round.

Each episode usually saw five rounds played, and then at the end of the show, the winning team captain would choose a member of their team to take part in a bizarre challenge to win some extra cash. The challenges varied from throwing increasingly large objects, to climbing down a flight of stairs face down while collecting marshmallows.

Each round is filled with questions that are impossible to answer. The rounds include:

- True or False: Each member of the panel is asked a question to which the answer is either 'True' or 'False'. e.g. Is Paul Daniels' head is wider than it is long? (True) and Bill Cosby was the first ever black man? (False, according to Vic and Bob it was Sidney Poitier).

- The Film Clip Round: Each team is shown a clip from a film or TV show for which there is then a related question. The clip isn't from a real TV show however, but actually a brief sketch or parody starring the show's regular members.

- The Impressions Round: Here the 'Random Light' would shine upon a member of the panel, who would then have to give an impression. The other contestants had to buzz in and guess who the impression was of. This round would always include Vic singing a song in the style of a 'club singer'. Vic would sing in a strange way with George providing a drum beat, as the panel tried to decipher what Vic was singing about. 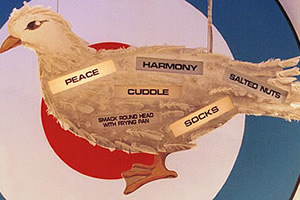 - The Dove From Above (Series 1-3 and 6): The panel would coo down a dove from the studio ceiling. This dove had a series of categories on it. The panellist selected a category and were then given a question related to the subject. One of the categories in the round had a special prize hidden behind and if selected Vic would award them and say, 'Eranu!' If at any point someone got a question wrong in this round, Vic would say, 'Uvavu!' Sometimes, one of the questions would be in the form of a song sung by George. There were various versions of the round, including The Crow From Below, The Vest From the West, The Beast From the East and The Fly Upon High.

- Donald Cox, The Sweaty Fox (Series 5): Donald Cox was a large, drunken fox (voiced by Rhys Thomas) who was summoned by the power of gin.

- The Maverick Round: In this round, one of the panellists would stand in the middle of the studio and represent something 'through the medium of dance'. George Dawes would then judge the dance, but would never give any points.

- The Quickfire Round: In this final round, the panel are asked a series of questions until George ends the round. The drummer does this by screaming a word (e.g. "Leakage!"), a phrase in a regional accent ("That's it! I'm turning the car around and we're going back to Dorset!") or advertising slogans ("Have you ever been to a Harvest before?").

- The Final Challenge: One member of the winning team takes on a bizarre challenge in order to win a small cash prize. The challenge changed every week. Previous challenges have included Mark Lamarr trying to avoid being knocked off a podium by a series of stuffed animals armed only with a toy shield, and Martin Clunes having to balance roast chickens on Les Dennis' back. 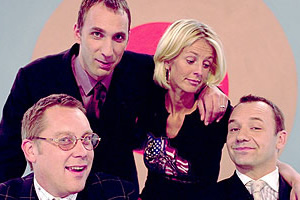 After three series and several Christmas specials, Mark Lamarr left to focus on presenting Never Mind The Buzzcocks, and the show went on hiatus while Reeves and Mortimer presented a new sketch programme: Bang Bang It's Reeves and Mortimer. However five years later, in 2002, Shooting Stars made a return to TV...

Mark Lamarr didn't come back however, and so he was replaced as team captain by the equally grumpy and aggressive Will Self. Johnny Vegas was also introduced as a regular panel member on Ulrika's team.

Two major changes were made to the games at this point too: the impressions round was completely scrapped, and the Dove From Above was switched to The Wonderful Wonderful Car (and then later Donald Cox the Sweaty Fox). The club style song still survived, however it became part of a latter round.

Whilst it was still pleasing audiences, Shooting Stars wasn't quite such a roaring success this second time around. The main reason for this is perhaps that Reeves and Mortimer's style of humour had noticeably changed to a more mainstream, adult style during the intervening years, meaning the new episodes didn't have the same level of surrealism as the early series. Another problem was that running jokes were beginning to become a little over-used in the view of many of the fans. As a result the comedy felt less spontaneous, and it lost a little of the silly edge that it possessed.

After another Christmas Special, the show finally looked to be gone for good. Matt Lucas went on to become a big star with Little Britain; Reeves and Mortimer fronted two new shows, Catterick and Monkey Trousers; and Johnny Vegas moved into sitcoms, starring in shows like Ideal and Benidorm.

But in the July of 2008, a surprise development saw a new Shooting Stars documentary and a new Christmas Special announced. Ulrika returned as team captain, but Self did not, so he was replaced by depressed dead-pan comic Jack Dee. Guests were Peter Jones, Kate Garraway, Christine Walkden, and Dizzee Rascal.

Following the success of this special episode, the BBC commissioned a full series for the autumn of 2009 with Dee as a permanent captain. As Vegas was no longer a resident panellist, a member of the public was added as the new regular guest: award-winning burger van owner Angelos Epithemiou (who some might say reminds them of comedian Renton Skinner in character). In 2010, Lucas was not able to return as George Dawes due to filming other projects, so Angelos was given the job of the man with the scores. 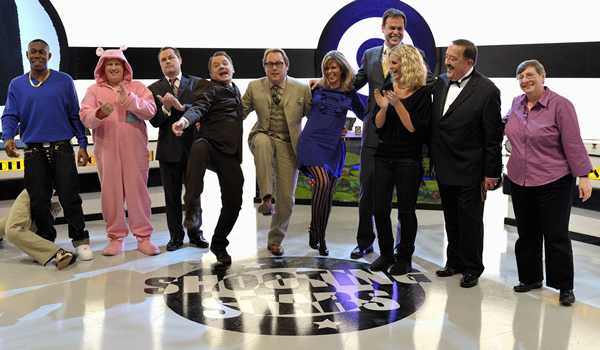