A new gang has rolled into Chatsworth with an unlikely mission - to save the souls of the community. 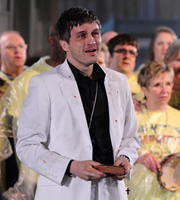 A new gang has rolled into Chatsworth with an unlikely mission - to save the souls of the community. Jesus O'Toole leads the group and seems to know too much about certain residents... who is his informant? Jesus divides opinion on the estate.

Aidan is certainly open to the possibilities that religion might bring, but love soon turns to hate when local businesses are picketed.

An explosion on the Maguire's turf sees the family prepare for revenge. Kelly is attacked by a stranger in a balaclava. A familiar face is on the run, but given his track record help isn't in abundance until Kelly comes to his rescue in several ways, making Shane green with envy.

And a former resident returns, spiritually born again it's Patty. Missing Libby she turns to the only person who might know of her whereabouts - Frank.