Frank isn't much use in the parent department, staggering to the Jockey and leaving Carl to nurse pox-ridden Stella. 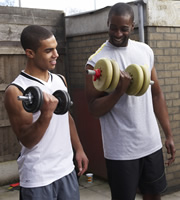 While cleaning the windows, Jackson spots Letitia kissing Dee Davies in her bedroom. Jackson goes berserk, attacking Dee in front of a social worker who's waiting to assess him and Avril as foster parents.

Frank isn't much use in the parent department, staggering to the Jockey and leaving Carl to nurse pox-ridden Stella. Pissed-up Frank leaves the pub and accidentally gets on a mini-bus, waking up in a synagogue. He's discovered by Isaac, who promises not to report him because Frank's been sent from God. Frank thanks Isaac for his advice and hospitality by stealing his candelabra and legging it.

When Jackson discovers Letitia is 'revising' at Dee's he goes mad. Through Dee's window, he sees old flame Alyah and draws a terrible conclusion: he must break up Letitia and Dee. Carl helps Jackson with his plan, but will it work?