Kelly is outraged to discover Lillian has formally adopted Bonnie and handed her over the business. 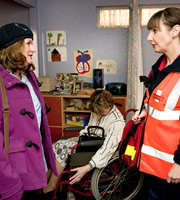 With Bonnie as the new boss it isn't long before she shows her true colours with a new regime that forces Lillian into prostitution.

Elsewhere, Libby's new job leaves little time to look after Patty, so she hires a carer, Jenny. But Patty soon realises that Jenny isn't quite what she appears to be and takes matter into her own hands.

Meanwhile, Carl and Sita's relationship comes to an abrupt halt when Sita reveals she's leaving Chatsworth for an arranged marriage. And Avril and Jackson take action when Letitia's crush on Carl gets out of hand.