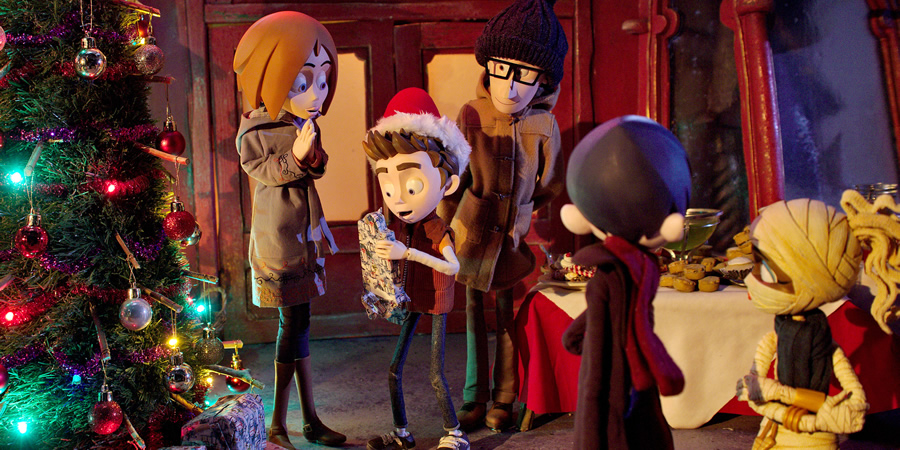 It's Christmas on Scream Street, but nobody seems to enjoy it as much as Luke and his family... in fact they all seem terrified! Can Luke save the town from the Grumpus and restore a Merry Christmas?

While Mike puts up Christmas lights and stockings in the Watson house, the Negatives turn off their lights and board up their fireplace. Luke goes to deliver his friends Christmas presents in high spirits, but when he gets to their houses their doors are shut and Christmas presents are piled up on the doorsteps.

Cleo and Resus explain to Luke the horror of Christmas on Scream Street: the evil Grumpus attacks on Christmas Eve and so they leave presents for him so he leaves them alone. Luke ignores his pals and returns home, still in high spirits. He doesn't tell his parents why nobody is coming to their Christmas party and they all head off for an early night. Luke is disturbed by a loud noise, and when he investigates he discovers a cloaked figure - the Grumpus!

The Grumpus destroys the Watsons' Christmas decorations and disappears. Luke's parents are terrified and, much to Luke's dismay, pile their presents outside their door for the Grumpus in case he came back. When the Grumpus comes for the presents, Luke, who is determined not to lose his presents, follows the monster.

Using his wolf abilities, he catches up with the Grumpus, but suddenly there are two Grumpus - or Grumpi - and then one disappears...

Luke becomes suspicious, especially when he discovers a clue dropped by the Grumpus. Luke has a plan to discover who the Grumpus is, and Cleo and Resus help him to set up a trap - but will they be able to stop the Grumpus ruining Christmas again?