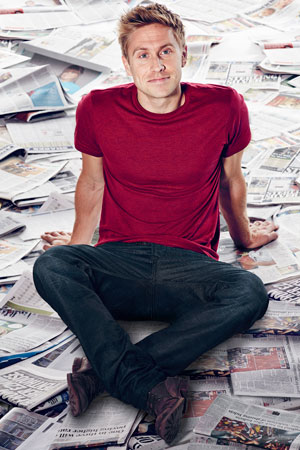 Russell Howard talks to BCG about what's coming up in Series 10 of 'Good News', where he gets his t-shirts from, and what it was like to work with his sister on a new comedy project...

How often do you find yourself looking at the news agenda and wishing the show were on air to lighten the mood?

I try not to look at the news when I'm out of series, to be honest. It's either depressing or there are stories you'd really love to cover, which sort of kills you!

But we're nicely enraged now, we're quite excited about talking about the NHS and the junior doctors, I think that'll be pretty meaty. Plus we've a new Lib Dem leader, a new Labour leader ... quite a lot going on. It should be good!

Are there stories in the past that've just been too grim to find a Good News angle to?

Not really; every week we just look at a story, and maybe we'll look at the way the media are covering it, or maybe someone says something that gives you a particular angle. But there isn't anything that we wouldn't cover. If it's a big enough story, irrespective of whether it's kinda grim or not, we would figure out a way to do it. We'd never be glib about something, but there's always an angle.

You must be really happy to be back.

Yeah, it should be fun! I love doing the show, mainly because I write it with three of my mates, so it's a lot more fun than writing stand-up, where you just do it on your own and then travel around. I like the community of Good News, really. That's why I love doing it.

You've had a fantastic array of guests in the past. Who's been your favourite? Do you have any say in who comes on?

When we used to do the mystery guests I genuinely didn't have any clue who they were; from the last series I got a say in meeting people. Like I really wanted to meet Alan Johnson (Labour MP) and he was great. We also had a guy called Doug Allan (Series 9 Episode 4), he was probably my favourite. He was David Attenborough's cameraman, and he just had so many fantastic stories... He's the only man I've met who's told a polar bear to "fuck off" - and it worked!

I like interviewing interesting, fascinating people rather than celebrities just flogging stuff. Sort of like I am now! But someone who doesn't have an agenda, they're just interesting.

We think you've worn a different t-shirt in every single episode. Where do you get them from?!

I dunno man! Shops...? Some of them are mine, some are bought for me. A lot of them now are on various of my cousins who live in the west country. My cousin Lewis has got loads of my old clothes that I had from Good News, he just takes it. And my brother just rocks up wearing a lot of clothes I was wearing four years ago!

Has there been a notable demographic change in either your or the show's fans since moving to BBC Two?

I don't know really, I don't pay attention ... in gigs I get a pretty broad mix, anything from 16 to sort of like, 50, really. It doesn't feel like it's massively changed. I think the past couple of years maybe they've got slightly older but I'm not sure... 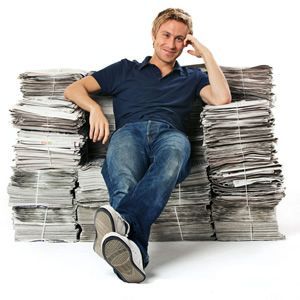 The show's grown hugely popular overseas too, available on YouTube, and you yourself on a mini world tour recently...

Yeah that was amazing. They were only small gigs to be honest, I was doing like 400 seats in New York City, but still really exciting to do gigs in the US. And doing Jimmy Fallon's TV show - it was nice to be terrified again! That "I'm just about to go and do stand-up on The Tonight Show" is something I never thought would happen. And he then invited me over to the sofa, that's apparently when you know you've really done well. A few of my comedy nerd friends were pretty excited about that! Notably my friend Steve Hall.

The US is a pretty notoriously hard market for British stand-ups to crack?

It's that weird thing, I don't necessarily want to "crack" it or anything, it's just nice to travel around a different country and do gigs. It's the same as Australia or, well I did some gigs in Norway last year. If you look at John Oliver, he's well and truly cracked it in the US. And they love him out there. James Corden as well. They don't mind us.

You're not the only comedy talent in your family. Was it obvious from an early age you and Kerry had similar talents? Who egged who on?

Well Kerry's a lot more talented than I am, and my brother is as well, but Kez was always ... well, she used to do acting from a very young age, and I was quite quiet really, but I fancied doing stand-up. When I was sort of 16 I made my mind up so I used to just write jokes in my room. Then I kind of went off and did it. You know, without telling anyone. From 18-21 that was what I did at university. Whereas Kezza went to university and studied and stuff.

When we worked together recently on our Christmas comedy, A Gert Lush Christmas, I was kind of surprised really at how talented she was, and it made me realise how I crap I was! 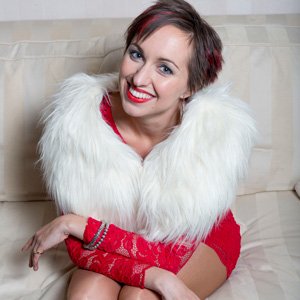 What can you tell us about A Gert Lush Christmas?

Basically it's a thing I wrote with my mate. It's about a fictitious family in the west country. My character meets a girl and brings her home to meet the family for the first time. Then all hell breaks loose and it's disastrous. That's it really! It's very funny and warm, and hopefully people will love it.

Neil Morrissey plays my dad and Greg Davies is my uncle. Sophie Thompson is my mum, and there's a load of other great people. A girl called Hannah Britland, who is amazing, she plays my girlfriend. Yeah, I think it'll be good actually!

Kerry described the show recently as a "love letter" to your parents?

Yeah, it's pretty soppy and it's pretty warm, but it's just about the crazy family I've got, and it's kind of a celebration of them.

We saw via Twitter that you drunkenly bought an electronic drum kit... how are you getting along with that?

I'm getting on alright, yeah! Everyone who comes round: Greg's been on it, Roisin Conaty's been on it, and I'm going to get Morrissey on it soon. It's a good thing to have for parties, I tell you!

Russell Howard's Good News is on BBC Two on Thursdays at 10pm.