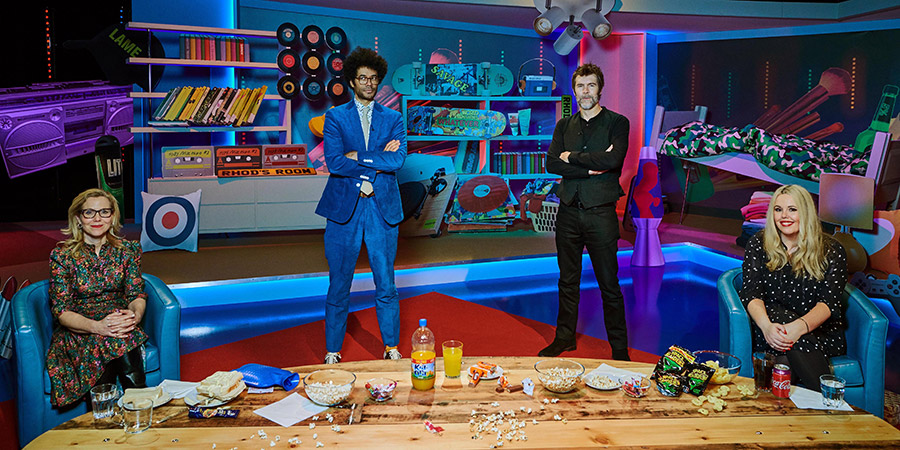 Rhod is joined by comedians Sally Phillips, Richard Ayoade and Roisin Conaty as they travel back in time to their teenage years.
Preview clips

In tonight's episode Rhod is joined by comedians Sally Phillips, Richard Ayoade and Roisin Conaty as they travel back in time to their teenage years.

In the closely-fought competition to win the title of Most Embarrassing Teenager, Sally reveals a mortifying school nickname, Richard tells the story of having his tooth knocked out at his first (and last) rock gig, and Roisin is quizzed by Rhod on her love of New Kids On The Block.

Rhod himself shares the story of a teenage trip to France, which ends with him accidentally crushing his testicles. We revisit three embarrassing years for popular culture to find out which one had the worst hairstyles, most inappropriate comedy and naffest pop charts - and finally Rhod sets a quickfire quiz which sees the guests answering questions on...their own teenage selves.

Rhod Gilbert gets the inside scoop on childhood nicknames for guests Sally Phillips, Richard Ayoade and Roisin Conaty. Richard claims he never had one, while Sally had a fairly memorable moniker growing up.

Sally Phillips and Roisin Conaty commiserate over the pains of hair removal as young women, while Rhod Gilbert shares his own embarrassing teenage tales confessing to Richard Ayoade that he actually added hair to body parts which were lacking.

Richard Ayoade, Sally Phillips and Roisin Conaty run through their most embarrassing years. They flashback to 1988, 1991 and 1996 and talk Kylie Minogue, Richard & Judy, Bryan Adams and candid camera shows.