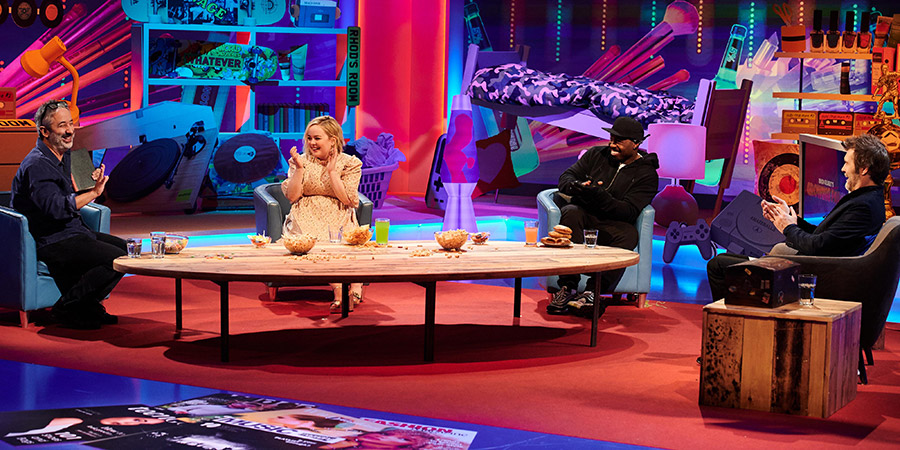 David Baddiel, Nicola Coughlan and Darren Harriott revisit their teenage years, with the host judging which of them had the most embarrassing adolescence.
Preview clips

Rhod Gilbert asks comedian and writer David Baddiel, Derry Girls star Nicola Coughlan and comedian Darren Harriott to share their teenage stories. Whose adolescent experiences will be consigned to Rhod's memory box of shame and win them the coveted title of Most Embarrassing Teenager?

David tells a mortifying story about his parents' sex life, Nicola reveals the lengths she went to to meet Busted, and Darren's first kiss story ends with an unfortunate accident.

Each guest chooses an Embarrassing Year from their youth, bursting with shameful culture, music and long forgotten fads - which one will Rhod decide is the most woeful and consign to the box for eternity; will it be David's 1979, Nicola's 2004 or Darren's 2001?

In case there is anything they have forgotten to tell us, Rhod has got hold of some mortifying morsels of information from their friends and family - whose Mum never let them ride their bike on the road? Who job was it to listen to people having a wee? And finally they offer advice to teenage selves, and Rhod crowns one of them Most Embarrassing Teenager.

David Baddiel, Nicola Coughlan and Darren Harriott recall for Rhod Gilbert what sort of teenagers they were growing up, including some colourful nicknames they used to be known by.

David Baddiel, Nicola Coughlan and Darren Harriott run through their most embarrassing years. They flashback to 1979, 2001 and 2004 and talk James Bond, So Solid Crew, Peter Andre and eye brow fashion.