Adam signs up for a course on how to save his church - led by Roland Wise. He also struggles between his beliefs and church law when asked to marry a gay couple.
Preview clips 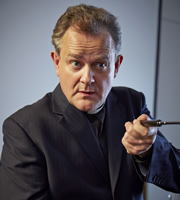 Adam's put on the spot when two of his and Alex's friends ask him to marry them. Of course he'd love to but there's one problem: they're gay and the C of E have a tiny bit of a problem with gay marriage.

Meanwhile, Adam signs up for a course on how to save his church - led by Roland Wise. Is Roland's explosive IED (Invade - Evangelise - Deliver) approach to ministry the answer to Adam's prayers? Probably not.

I won't visit you in prison

Adam has to do some emergency re-writes to his service, but Nigel is not happy.

The I.E.D of Ministry

Roland has a new and explosive way to get Adam's church back in the black.