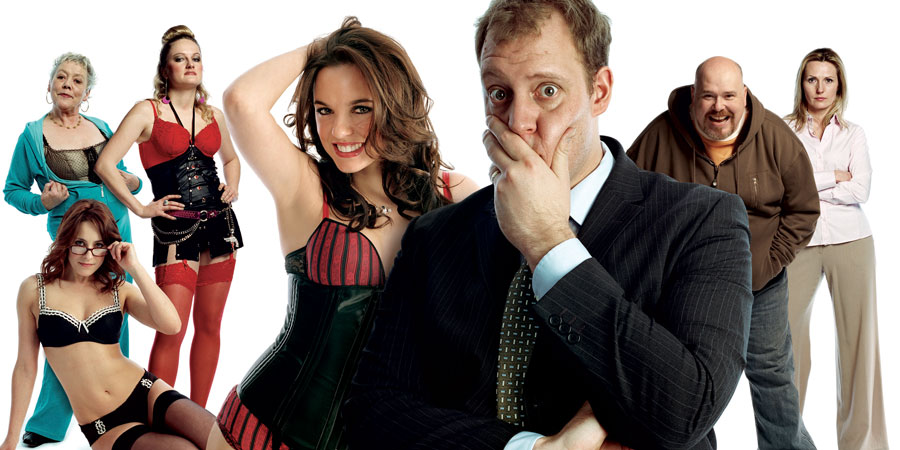 This Channel Five and Paramount Comedy Channel produced comedy series follows a group of young women working together, squabbling, chatting and bonding, just like any other work force really. There's just one difference: they all work in a brothel.

Respectable is set in The Debonnaire, and like thousands of brothels throughout in Britain it's outwardly respectable, it's twee... and it could be next door to you. The Debonnaire is run by Maureen, played by Beatrice Kelly, a chain-smoking "very skilled" granny who's seen it all. Jodi Albert plays Hayley, who's sweet and adorable and dreams of one day making it all the way to reality TV. She's also extremely dim. Cordelia Bugeja plays Kate, a brainy postgrad student; and the scary Yelena, a Serbian war criminal on the run, is played by Barunka O'Shaughnessey.

Into this world enters our hero: shy, clumsy Michael, played by Justin Edwards, whose marriage has slowed down to the point where he and his cold, carping wife are two strangers living in the same house. After spending ages plucking up the courage, he stumbles into The Debonnaire and falls head-over-heels for the beautiful Hayley - but unlike the various misfits who make up her regular clientele, he's far too polite to actually ask her for sex. In this unlikely setting, surrounded by sex toys and skimpies, the love story develops. Will Michael tell Hayley how he feels? Will his wife discover his chaste "affair"? And, will Hayley leave her job for the man who wants to look after her?

As the first episode begins, we see a jealous Frenchwoman rushing up the stairs and berating her unfaithful husband, who she has caught in flagrante delicto with another woman. But all is not what it seems - the "wife" is Naomi, the brothel's "maid" (its secretary, who takes the bookings, and carries out other non-sexual tasks). But, bless her, she's bungled her act once more: the man's wife is from Hastings, not France... and what was she doing wearing that crazy wig?

The show's first running joke is established: no matter how many times Naomi does her act she'll never get it right! While chaos reigns upstairs, we get to know the other girls as they hang out around the kitchen table. Blonde Yelena is intimidating in the extreme, with a titanic ego ("I was sexiest woman in village... before ethnic cleansing") and an unusual taste in men: "Slobodan Milosevic, Arkan... they are real men!" Hayley is sweet-natured and easy on the eye, but not the sharpest tool in the box ("Are they footballers? Which team do they play for?").

Kate is also a looker, with an IQ several hundred points higher - her work here subsidises her academic career. And Maureen has been there, done it and bought the T-shirt - she's the house's mucky mother hen who still keeps in practice - she's the woman to choose if you're looking for "a more demanding experience"!

Barry, the man who has been decorating Michael's house, is one of the brothel's best customers, and is highly amused to find Michael in The Debonnaire. The rather panic stricken Michael would rather not be his "brothel buddy", however much to Michael's relief Barry thankfully agrees not to let on to his wife where Michael has been. But how long will that last, as Barry isn't exactly your quiet type?