In hopes of discovering a live human woman inside an escape pod found in the midsts of space, the Red Dwarf crew head to a prison colony to use its facilities. However, Rimmer could be in for a longer stay than he bargained for. 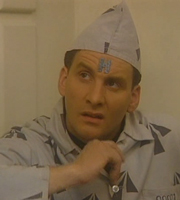 After recovering an emergency escape pod claiming to carry a cryogenically frozen female, Cat is desperate to open it - after all, what woman wouldn't want to date him? Lister and Rimmer however are less keen, particularly after viewing the pod's black box data.

Venturing aboard the prison colony, the Dwarfers find themselves subjected to a mind reading probe as part of the complex's security measures. It determines that whilst Kryten, Lister and Cat may go freely, Rimmer should serve 8 years' for each of the 1,167 lives lost aboard Red Dwarf!

He is duly sent to the 'Justice Zone', a sector within the colony complex where it is impossible to commit any unjust act without the same, equal act being perpetrated against you.

However, Kryten saves the day when he proves to the ship's computer that the only 'guilt' weighing on Rimmer is firmly in his mind; a man so pitiful and weak had no real power, certainly responsibility or culpability for the drive plate leak!

The computer is, thankfully, convinced, and Rimmer duly released from the Justice Zone. Unfortunately the escape pod has now thawed out - and it is indeed a Simulant inside...