Venturing off of Red Dwarf to explore an identified ship floating nearby, the crew find all its inhabitants dead. In a characteristically inquisitive manner, Cat discovers a DNA modification machine, and unwittingly turns Kryten human. 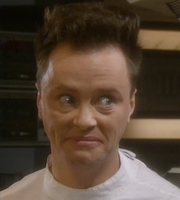 Tracking an unidentified craft that's floating nearby, the Dwarfers eventually dock with the strange ship and prepare to board. What they discover, however, is rather alarming: an apparent human - with three heads!

It soon becomes clear that this ship is packed with technology they've never come near before, notably a machine that literally rewrites the genetic makeup of any organic matter, with the potential not just to change characteristics such as the number of heads one possesses, but one's species entirely. It isn't long before Lister finds himself on the wrong end of the machine's transmogrification ray - and turned into a chicken!

However, there's worse to come for Kryten. With a little help from Cat (and none whatsoever from Holly), the small amount of organic matter that constitutes the core of his mechanoid brain means the machine is able to change him too, and he becomes human.

He's initially delighted by the change. After all, being human's what he's always wanted. But it soon becomes clear that being human is, in fact, not all that he thought it was cracked up to be...