After discovering that they're able to literally step into the past through photographs, Lister resolves to change his past, become a multi-millionaire and never board Red Dwarf. Rimmer however, is less satisfied with this new reality. 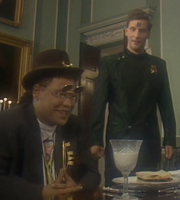 While developing some photographs in Red Dwarf's lab, Kryten discovers that the pictures in the photos are moving.

He calls the Dwarfers to see and they soon realise that they can jump into any projected photo slide and travel back in time - although they cannot move outside the frame of the photo.

Lister decides to travel back in time and change his future so he doesn't end up on Red Dwarf for the next 3 million years. The plan works, until Rimmer interferes to get him back...

This episode credited Adolf Hitler, guest-starring as himself.