Rimmer and Kryten crash-land on a planet and are shocked to find it is Earth - but an Earth where time is running in reverse. 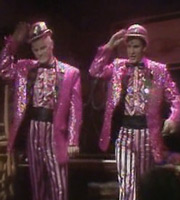 When Kryten gets sucked into a time hole and crashes Starbug 1 onto a planet during the space-ship equivalent of a driver's test, he and Rimmer are shocked to discover that they've landed on Earth.

It's not quite as normal though: time is running backwards. After the Big Bang the universe expanded, but they've gone so far into the future that the Big Crunch has now happened, the universe is contracting, and everything going in reverse accordingly.

When Lister and Cat finally find them, it's 1993 and Rimmer and Kryten are working as a novelty comic act. They're not keen to leave their popularity and success, but Lister's involvement in a brawl would seem to seal their fate in this backwards world.