Holly's new invention of the 'Holly Hop Drive' promises to take Red Dwarf back home to Earth in a mere instant. What it manages, however, is to flip the ship across the fifth dimension divide and into a parallel universe. But a greater surprise is in store: there's another Red Dwarf here too... 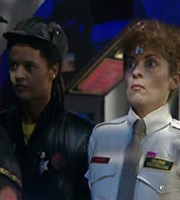 Holly has invented a new technology he dubs the 'Holly Hop Drive'. It appears to be just a plain box with stop and start buttons stuck on the top, but he assures Rimmer, Cat and Lister that it can take them to any place in the universe. Naturally one destination springs to mind: Earth.

Starting the machine, nothing appears to happen and the Dwarfers are convinced they've stayed put. Even Holly is confused and dismayed not to be able to find Earth out of any of the windows. What he does see, however, is another Red Dwarf. It seems that the Holly Hop Drive has in fact sent the ship into a parallel dimension. Everything should be more of less the same, just a little ... different.

Boarding the ship, Lister and Rimmer are shocked to find female versions of themselves - just as neurotic, forthright, obnoxious, know-all and slobbish as their counterparts. There's distinct sexual chemistry between Holly and Hilly; and Dave and Deb Lister hit it off right away; but whilst initially pleased to have found someone of such exacting standards, it's not long before Arnold has grown weary of Arlene Rimmer.

Cat, meanwhile, is horrified - his opposite is a stupid, stinking dog! There is, however, a far bigger shock in store for Dave Lister.