The long-overdue arrival of a postal delivery brings untold goodies for the Dwarf crew: films, letters from home, news reels, and plenty more besides. One particular video game, the virtual reality title Better Than Life, is of particular interest. 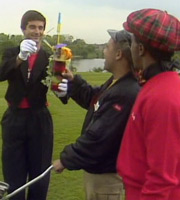 When the Red Dwarf post pod finally arrives on the ship three million years late (although as Holly says "That's about average for a second class post!"), amongst its contents are found to be letters from home, video games, films and newsreels.

One particular video game, Better Than Life, reads brainwaves to create a virtual universe of the mind's deepest desires and fantasies - naturally, the Dwarfers can't wait to try it out..

Initially, things couldn't be better. Cat's found a girlfriend, Marilyn Monroe fancies him, and Lister's got a vibrating water bed in the shape of a guitar; but things begin to go awry before long. It seems that Rimmer's mind cannot accept good things happening to him, even in virtual reality. It rejects all happiness and turns his best wishes into his worst nightmares.

The trio escape from the game just in time to avoid being eaten alive by killer ants. Better Than Life, however, doesn't seem keen to let them go.