Series I, Episode 4 - Waiting For God

Whilst Rimmer preoccupies himself with an unidentified object that Holly has tracked and brought aboard the ship, Lister is in equal measure distraught and amazed to discover that owing to a few horrible misunderstandings all those millennia ago, he is the cat god Cloister. 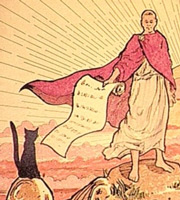 Rimmer's stressed and excited in equal amounts when Holly tracks and brings an unidentified object aboard Red Dwarf. Whilst he panics about quarantine and imagines that the alien beings who originated the strange object may be able to restore his body, Lister immediately identifies it - as one of Red Dwarf's own jettisoned garbage pods.

Meanwhile, Cat has shared with Lister a number of books, including the sacred feline Holy Book. But what starts out as a fascinating voyage of discovery into another culture soon sends Lister into spiraling despair as he realises that he is the cat god - 'Cloister' - and that wars have been fought, and many, many cat lives lost in his name. And all because of a misunderstanding over the colour of a hat.

How will Lister cope with the guilt and daunting responsibility of being the sacred deity of an entire race? It remains to be seen whether he or Rimmer, still obsessing over the 'unidentified' alien object, will snap first. But as Holly says, "It's a laugh, isn't it?"