Series I, Episode 3 - Balance Of Power

Sickened to the last by Rimmer's toe-curlingly officious, petty nature - particularly galling considering he's the only actual human alive - Lister resolves to improve his standing on the ship and become the superior crew member. 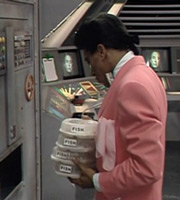 When Rimmer refuses to bring back Kochanski's hologram, Lister decides to get his revenge by taking a Chef's exam so he can rise to Officer and become Rimmer's superior.

Knowing that Rimmer unquestioningly respects and follows commands from people of a higher rank than him, Lister proceeds to take the exam. To try and divert him from completing it, Rimmer turns himself into Kochanski in hologram form and tries to change Lister's mind by telling him she never loved him.

Lister sees through this ruse and completes the exam anyway. At the end of the episode, Lister appears to have passed - but has he?

Lister's disco music in this episode was by Motor City Diva.