As the ship accelerates toward light speed in the readiness for the 3,000,000 year journey back in the other direction, toward Earth, peculiar things start happening. How can Cat be in two places at once? Holly's got some explaining to do - about something he terms 'future echoes'. 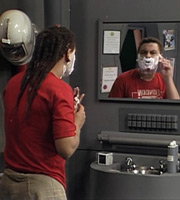 The Dwarfers are starting their journey back to Earth: even at the speed of light, it'll be another 3 million years before they arrive. Understandably, Lister plans to go back into suspended animation for the duration of the journey.

As they accelerate toward the speed of light, time dilates and the crew end up seeing pockets of their future in their own time. After some spooky but comical initial confusion, things turn darker when Rimmer believes he sees Lister being blown up in the drive room. In fact, it is actually Lister's son being killed far in the future!