Dimwitted third-class space ship technician Dave Lister is dumbstruck to find that, after what was supposed to be an 18-month punishment in stasis (suspended animation), he has woken up some 3 million years later, a radiation leak having long killed his Red Dwarf colleagues and left him as the last human being. 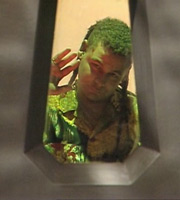 Having been locked in stasis - a state of suspended animation that not even time can affect - as punishment for smuggling his pet cat Frankenstein aboard the mining vessel Red Dwarf, the interstellar space ship on which he works, Dave Lister is incredulous to discover he is the last surviving human.

Originally sentenced to an 18-month freezing whilst the ship returned to Earth, Lister is woken by ship's computer Holly and informed that whilst he was locked away the rest of the crew died. It transpires that without Lister's help his immediate superior and begrudging work-mate Arnold Rimmer was unable to properly fix a drive plate, leading to a lethal dose of cadmium II to leak throughout the ship and turn the crew to neat piles of dust.

But there's a worse surprise to come for Lister: Holly reveals he had kept him in stasis not for the mere moment it felt like; not even for the 18 months of his sentence; but for some 3,000,000 years whilst the radiation from the cadmium leak died down to a safe background level. In the meantime, if it hasn't died out completely, the rest of the human race must have evolved far beyond Lister's feeble imagination.

However, he's not entirely alone. Rimmer has been brought back as a hologram. There's also Cat, a creature evolved from Frankenstein, who was hidden and sealed away in the hold by Lister before his suspension - and Holly itself, the ship's emotionally unstable and somewhat mentally challenged computer, charged with attempting to get them back home...