Caitlin Moran explains the plot of her semi-autobiographical sitcom pilot, Raised By Wolves... 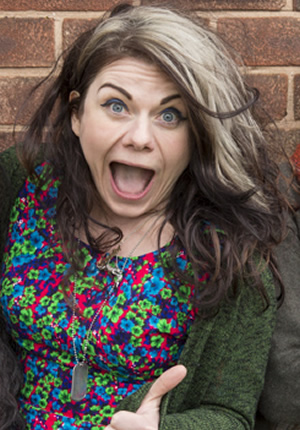 Raised By Wolves is written by me, bestselling author and award winning columnist Caitlin Moran, with my sister Caroline Moran, who is actually the one who wrote all the funny bits while I sat on the desk going "What shall we wear to the BAFTAS? Let's wear Ghostbusters jumpsuits, and see if we can get off with Ant & Dec."

Set on a Wolverhampton council estate, Raised By Wolves is modern day reimagining of us, when we were growing up - loads of kids, no money, home-schooled, and educating ourselves on mankind's great bounty of books, films, TV and pop music. Do you remember when people used to go on about the notion of a progressive working class? When admitting you were on benefits didn't immediately mean that you were morally incontinent scrounger scum? Yeah, neither could we. It's been ages. Telly never has any smart, amusing intellectuals living on a council estate. That's why we wrote the sitcom. Well, that and the chance to make a load of jokes about vaginas.
Germaine, Aretha, Yoko, Mariah, Wyatt and baby Cher live with their mother Della, in a three bedroom council house. Della has a policy of naming all her daughters after strong female role-models, and her sons after characters played by Kevin Costner. Della loves Kevin Costner. And Russell Crowe. Men who are men. Who knows how this has been influenced by her dad, Grampy - a wiley old stoner in £12 market jeans, who often advents through the window ("I don't like keys. I operate on trust.") to dispense his wisdom to his grandchildren (Germaine: "What makes a boy like a girl, Grampy?" Grampy: "Well, I'm an arse-man myself, Germaine.")
Grampy advents through the window a lot, as he's always being thrown out of Shit Nan's house. Their relationship is "febrile." Not as febrile as the on-going Sister War between the two oldest Garry children, though: Germaine (15, and 15 stone) and Aretha (14, angry, ginger.) This is a to-the-death battle of life-long rivals - Batman vs. The Joker. Sherlock vs. Moriarty. Toad of Toad Hall vs. Badger, when he gets in a bad mood and comes to take the car away.

Germaine is a verbally incontinent, extravert optimist with an almost deluded self-belief, and a desperate desire to get laid. Aretha, on the other hand, is an icy, still, angry introvert who just wants to be left in peace to read Orwell and Jung, and imagine being in a "walking and talking" scenario with Barack Obama.

Unfortunately, Germaine's obsession with the local yob, Lee Rind - imagine a walking bottle of Lynx Africa - means she frequently has to drag in Aretha to be an unwilling Goose to her Maverick.
But while Germaine and Aretha deal with Germaine's sexual destiny and Aretha's enlarged pores ("Aretha! It's like looking at a colander!"), their mother, Della, is quietly preparing for the break-down of society. She's seen the socio-economic writing on the wall, and is preparing, like the Sarah Connor of Wolverhampton, for the Apocalypse ("Fucking David Cameron!") - whilst running an eBay business of vintage clothing on the side ("These mugs will buy any mental moth-munched rara skirt if you list it as 'Like Sarah Jessica Parker in Sex & The City.' These people don't deserve money.")