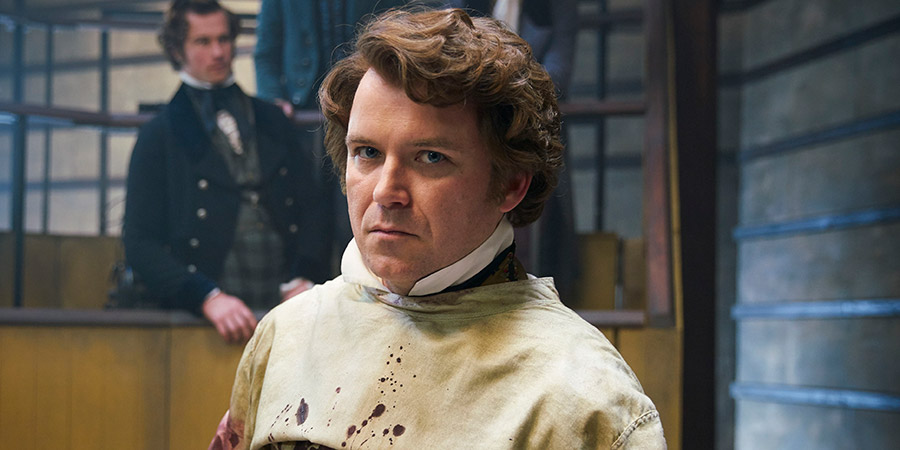 What made you want to be part of Quacks?

I read the script and I thought, 'That's actually really funny...', so I did the pilot. Then it took more than a year before we were all available to get back together, which meant that James had time to work on the scripts and get everything in place, then we could rehearse a month before we even started filming, which is an unbelievable position to be in.

And what was it that particularly appealed to you about the writing?

I quite like doing stuff that I haven't necessarily seen before or feels reasonably distinctive, and James is so meticulous and thorough about his research that it's funny to do.

You could see a comedy show about 19th century medicine as being quite broad with quite a lot of possibilities for slapstick, but actually what he's done is really delve into the time, and this period of grim discovery and invention, when all these people were pioneering new techniques that all of our lives have improved from, but equally as there would have absolutely been plenty of failures along the way as well.

Tell me a little bit about Robert.

Well, surgeons - particularly the top surgeons - were rock stars. People came to the theatres to see them perform and to operate, and I guess we still sort of think of surgeons in terms of their levels of confidence, shall we say.

Robert has that kind of God complex whereby, you know, a centimetre either way can end somebody's life, and you have to have a certain degree of conceited arrogance to be able to do that sort of thing.

Also, he's married and has presumably been attracted to his wife through her independent spirit and her questing, but come the chains of marriage being put on, he seems to be wound up by the very same things that he found attractive originally.

He probably didn't expect her to go this far with it.

She had used her skills to attract the right man, and now she can settle down and be a normal woman, seems to be his attitude to it all. And obviously he is unaware about any kind of flirtations going on between Caroline and William, and he sees himself as top dog.

He's probably the least pioneering of the three. There are elements of him that's trying new techniques and wanting to do things as fast as possible to minimise people's pain, and that's why he really finally allows John to try some of his drugs. But in terms of that period of time, I guess a surgeon's role hasn't really changed that much over history.

How authentic do you have to be in your acting, particularly during scenes where you are operating?

Well, James in particular is a stickler for trying. Obviously there is no one alive today who would be able to tell us, but the medical historians and The Wellcome Trust have been involved with this in terms of giving advice.

I've spoken to a few surgeons as well because lots of it hasn't changed that much, apart from perhaps size. An appendectomy would have involved a cut from top to bottom, whereas now it's tiny.

In fact, when I was born I had something called a pyloric stenosis, which I had a small operation for in the old stomach muscle, and I've seen people 20 years older than me who have huge scars down here, and I have a quite big one across here, and now of course they're absolutely miniscule in size. So even in that 40-year period there has been change.

I don't think I could be a doctor, I hope everyone would be pleased to hear that. But yes, it's funny, we have had prosthetic stuff to do, and quite a lot of delving around in guts, which are luckily not people's, they are totally made up. But also you have supporting actors who come in for the day to lie on the table, and it's amazing how quickly you distance or disassociate them from being human beings to being flesh. 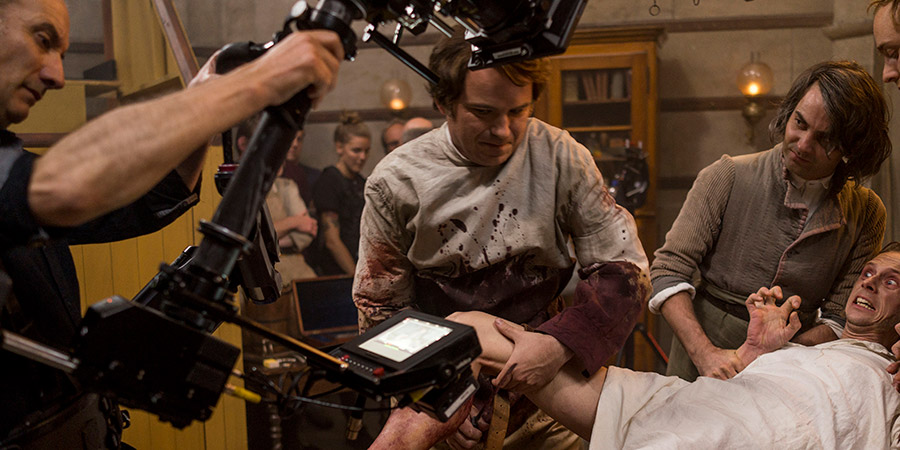 What actually happened in terms of people watching the surgery in the operating theatre?

The surgeon would do one show a week, so there would be one public showing, and they would usually try and get the goriest or the most pioneering or the most exciting.

Obviously when the big crowds were in, you wanted to do your best job, and you wanted to make sure they didn't die. And there is an element of playing to a crowd, sometimes introducing the type of surgery, what the patient is, what the problem is, and Robert loves it.

So in terms of your approach, did you approach his physicality as a rock star or as a surgeon?

It's probably more the peacock side of him, the conceited side, and the inviolable sense of right. I think he has to have an iron-clad confidence in what he is doing, and his right to be doing it. So that's pretty fun to play, that kind of character, as well as him being deceitful and underhand and a drunk and all the other things.

He has a bit of a hand tremor which we touch on lightly during the series and he's self-medicating with alcohol, so we don't know where that might go.

He plays up his lothario status as well, and enjoys it, and does very well as a surgeon financially.

I think they kind of admire and hate him, but they feel like a gang, friends that have known each other a long time. They love each other and would do anything for each other and are well aware of each other's weaknesses and stupidities, and certainly they find him unbearable at times, but equally they sort of know how important what he does is, and they sort of support each other.

And what about in real life? You're all writers, you've all done plenty of comedy, so I would imagine there are a lot of laughs flying around.

It's quite fun. In fact, probably one of the most fun jobs I've had, and that comes from Tom and Mat and Lydia as well, as well as Andy, the director, and Justin the Executive Producer. It's a really jolly little team.

Yes, I'm terrible, and Mat's pretty bad too. Tom's the steely resolve amongst us.

What makes you go?

Anything! People slightly stumbling over a line, I mean, it's pathetic! But it's been really fun. Before we started filming, we were all coming up with different stuff, and luckily James didn't feel threatened by that, and Mat's written an episode, so it's not as if he feels so possessive over it.

Your career is hugely eclectic: you've done lots of brilliant theatre, films, and TV... how does this compare? The sets are quite lavish...

Obviously having done Penny Dreadful for Showtime, that's set in a similar-ish time but a bit later. But in terms of sets and costume that have been created with this level of detail, it feels incredibly detailed and lavish.

And in terms of your character, how does Robert compare to your other work?

I try and find different characters each time you do a new role, because otherwise you get a bit bored, but he's... he's an arse!

Is he the biggest arse you've ever played?

I think he's the biggest arse that anybody's ever played! I mean, there are other arses, but not arses that are quite so justified. The most you can think about Robert is that he's an arse. Because he knows he's good at something, and he's right - and he is one of the best surgeons in London, if not in England. I don't think you can be a surgeon and be racked with self-doubt, particularly, well, specifically not in theatre.