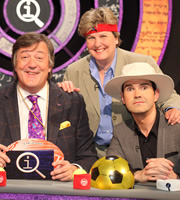 - The panel are wearing tennis sweat headbands, except Alan who is wearing boxing headgear.

- The sport in which Britain has been the reigning Olympic Champion of for the past 92 years is the tug of war, but this is because the event no longer exists.

- Tangent: Lee claims there are only three Olympic sports in which you have to go backwards: tug of war, rowing (except the cox) and the high jump. However, the audience point out that there is a fourth: the backstroke in swimming, which Lee disagrees with.

- The most dangerous sport for American women is cheerleading. Disasters in cheerleading have resulted in life-long paralysis and death. In 2002, 22,900 children between five and eighteen years of age went to hospital for cheerleading related injuries. 65% of all catastrophic injuries amongst American sports women were caused by cheerleading.

- Tangent: The most famous cheerleader in the USA was President George W. Bush, who was the head cheerleader at his all boys' high school.

- The most popular spectator sport in Britain until 1835 was cockfighting. 10 Downing Street and the Palace of Westminster both used to have cockpits. On Shove Tuesday for a fee of a "cock penny" boys could bring their game cocks to school and let them fight for the day. According to one quote: "A good cocker would think nothing of cleaning his cock's wounded head by sticking it into his mouth and sucking it clean." (Forfeit: Horse-racing)

- The final question is the details of donating money to Sport Relief.

- Everyone is a winner, and points are not announced.

A sports-themed short special of QI for Sport Relief 2012.