All of the characters are drawn back to the scene of their crime. Will anyone survive the great day of judgement? 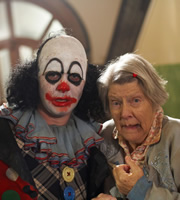 All of the characters are drawn back to the scene of their crime. Who has summoned them there and for what terrible purpose? Meanwhile, Kerry takes Robert from the theatre to the heart of the deep, dark woods. Will anyone survive the great day of judgement?

WARNING: LARGE SPOILER BELOW
(It turns out Mr Jolly was the black gloved stranger. He lured the characters back to Ravenhill to punish them for killing his mum, Nurse Kenchington. The series ended as Jolly blew himself up. Did anyone in the room survive?)

This episode is known on the DVD as 'Ravenhill'