We learn how Mr Jelly, the one-handed children's entertainer, ended up the way he is.
Preview clip 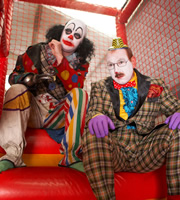 The plot continues to thicken this week as Mr Jelly reveals how he ended up that way. He also reveals why his nemesis, Mr Jolly, is to blame for everything, including his red, raw stump.

Mr Lomax, meanwhile, travels to the private auction of Snappy the Crocodile, in Dudley, and meets the eBay-obsessed Siamese twins, the Crabtree sisters.

Meanwhile, David and his mum dispatch their next victim disguised as beauticians, and Robert wreaks his revenge on Debbie during a midweek matinee of Snow White.

This episode is known on the DVD as 'Jelly'

David and Maureen in disguise

David and Maureen disguise themselves as beauticians.