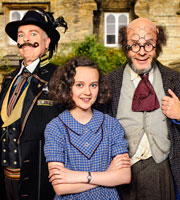 When Lady Pagwell dies, leaving a substantial sum to fund local inventing, it could mean the end of Professor Branestawm's money troubles. But scheming local councillor Harold Haggerstone will stop at nothing to thwart Branestawm and insists that Pagwell holds an inventing competition to decide who gets the money.

Haggerstone tries to hire his own rival inventor. When Professor Algebrain, from an unspecified European country, turns up, Haggerstone thinks he's onto a winner. Branestawm, meanwhile, is having problems of his own. Not only is he struggling to come up with an invention that will really knock the judges' socks off, he's upset his faithful young assistant, Connie.

He's so wrapped up in his work that he's been neglecting her, and she's torn between helping him and working with the seemingly charming and attentive Professor Algebrain.

Harry Hill is back in Professor Branestawm Returns.