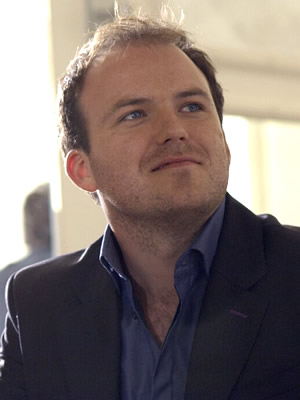 Below is an interview conducted with Rory Kinnear, who played the role of Rob in the 2007 pilot of Plus One. Rory didn't go on to star in the full series of the show due to commitments at the National Theatre and the filming schedule of the 2008 James Bond film he featured in.

That Rory Kinnear's surname is familiar is hardly surprising: His father, Roy, was one of the most celebrated comic and character actors of his generation. But Rory is increasingly making a name for himself, as a hugely talented actor, at home in the theatre or on screen, doing comedy, romance or tragedy. The 29-year-old, whose mother, Carmel Cryan, is also an actress, is charismatic, versatile and funny, and looks set to go far.

The same could not be said for Rob Black, Kinnear's character in his latest project, Plus One, a one-off, half-hour comedy pilot from the makers of Life on Mars. Rob has been invited 'plus one' to the wedding of an ex-girlfriend, who dumped him for her fiancé, Duncan James from the boyband Blue. Rob is determined to turn up to the nuptials with the most beautiful woman at the wedding. But he is at a low ebb - he's sleeping on his sister's couch, has a flat full of sewage, and a job he hates...

Below, Rory discusses his acting family, looking into the eyes of a former-Hollyoaks babe, and a mysterious and intriguing chilli story...

You're from an acting background. Do you think that something like that is in the blood?

I think a lot of kids end up doing what their parents do. Whether that's in the blood or not I don't know. Probably partly, and part of it is that you realise that it's a possible job to do, and you understand the ins and outs of it. I think the actors who start acting without it in their family background are making a much bigger leap into the unknown. I was lucky enough to know it would involve some of the time not doing anything, some of the time getting bored on the film set, and some of the time touring the country. I grew up seeing is as a recognisable job rather than some unattainable dream.

On a different tack, your grandfather, also called Roy Kinnear, was a successful rugby league player, wasn't he?

That's right, he was. He was the first player to move from rugby union to rugby league. He played for the British Lions and for Great Britain, so he represented the country in both rugby union and rugby league. Now there's a Roy Kinnear Award given to the best Scottish Under-21 rugby league player. He died when he was 38, so it's nice to learn a bit more about him. 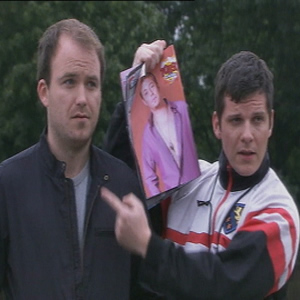 Were you ever tempted to go down the athletic career route?

Well, it won't surprise you to know that it skipped a generation with my father! I was initially marked out as being quite good at rugby. Until I was 12 I was captain of the school team. I should go on to point out that there were only 17 people in the class, so everybody had to play! I think I was captain because I was just a loudmouth. We tended to succumb to record points defeats quite regularly - pretty much in every game we played. Luckily, my illustrious career was curtailed when I had a back injury aged about 12.

When did you realise you wanted to act?

I did it from when I was about 9 or 10 at school. And I suppose the more I did it, and the more I was told I was quite good at it, the more I enjoyed it - a sort of Pavlovian response to applause! But at that stage I think I felt "I really don't want to do what my parents do - sad!" So I went to University and did an English degree. But I acted throughout University, so thought I'd give drama school a try, to see if it really meant something to me. And after a year of that, I realised I wasn't doing it just because my parents did it, I wasn't doing it just because it was fun - it actually meant something to me.

Do you think having your surname is a boon or a burden?

I can't really tell, to be honest. But what's delightful about it is that every job you do there are people from a slightly older generation who have worked with my dad and have stories to tell about him. That helps me to put together a fuller picture of him. It's a real treat that he was such a universally loved man. I think it would be a tougher job to do were he a notorious shit, and people were having to be polite about him. But I don't think I get given jobs because my dad was a nice man.

One of your sisters is a casting agent. Do you ever call her up and pester her to give you roles?

No, not at all. She asked me in once for something, and because I'm her baby brother she was petrified that people would say nasty things about me after I'd left, or I'd be nervous and mess it up. I tried to persuade her that I often auditioned three or four times a week, and it really doesn't bother me, but she got so nervous about it that I said "Unless it's an absolute shoo-in, don't bother." Now we avoid each other completely - professionally!

You've done a great variety of work. Do you prefer stage or screen?

The great thing about being an actor is that there are loads of different things to do. When I was a kid and I thought about being a sportsman, I always wanted to be a decathlete, because there were so many different disciplines, so you wouldn't get bored. I guess that's my attitude to acting. I get something from each different medium. It keeps it interesting, which is I guess what we all want in life.

So would you say the same thing about flitting between drama and comedy?

I think that life itself is a little bit of both, and I don't really see comedy and tragedy as distinct disciplines. Acting is about creating a full-bodied character. Obviously the script can lead you down comic or tragic routes, but you're always basically doing the same kind of job, fleshing out a character that people can believe in.

What ambitions have you got for the rest of your career?

You know... staying alive, keep working. So far things have been fantastic. I've been able to do a whole variety of things, and I still haven't been found out. So I want what every actor wants - to keep on doing it until I'm found out.

It's quite tragic for Rob, the character you play in Plus One, isn't it?

Exactly. When we meet Rob it's not the best time in his life. In fact, it's quite uniquely bad, having been dumped, having had to leave his flat thanks to a sewage accident, having to stay on his sister's couch, and having a job he despises. But he's got an intelligence and a brightness and a charm about him, so you kind of think he'll be able to get himself out of it. You just assume that he might just make it each time, and he never quite does. 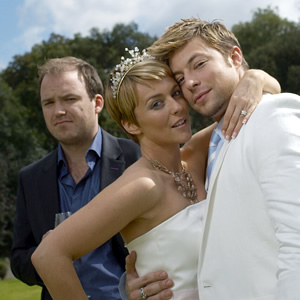 Was Plus One good fun to film?

It was actually. It was a really lovely cast. We only filmed over six days, but it was nice being a lead because you're there the whole time, so you feel you have a relationship with the crew and the rest of the cast. That was really nice. I guess the 'chilli scene' was a little uncomfortable to film, but apart from that, I had a great time.

Presumably it's not too bad when your role involves you surrounding yourself with beautiful women?

Yes. It was a peculiar day, filming outside in Dulwich on a cold Wednesday morning with Gemma Atkinson in a bikini. Obviously one is a gentleman, and one kept oneself looking firmly into her eyes. And Duncan James was there in his white wedding outfit. It was quite odd.

They were both very good sports at sending themselves up, weren't they?

Yeah, very much so. They were both well aware of what the script was aiming at, and played up to it really well. We wanted 'Duncan from Blue' as opposed to Duncan James, and I think if anyone knows the difference it's Duncan. And it was the same with Gemma. They're both aware of how they're perceived, and however far away that is from how they actually are, they were perfectly prepared to send themselves up.

The story really revolves around Rob wanting to go to his ex-girlfriend's wedding with a stunning girl on his arm, to outshine her. Is that an emotion you can relate to?

I don't think I've ever quite felt like that. I have been to ex-girlfriend's weddings, but happily I've never felt the need to show off. I think his pain is partly because she is marrying quite so quickly after she dumped him, and marrying Duncan from Blue. I think that's why his pain is so acute, and why he feels the only way he can put a plaster over that is by employing the old favourite of turning up with a more beautiful girl than the bride. It's not something I've ever tried resorting to.

Well, I can't top what happened to one of the writers, which was exactly what happens to Rob in the film.

No, really. As he said: "Were this to be made into a series, it would feature all the aspects of my romantic life being exploited." He's been on about a decade of unsuccessful dates. I don't think they've all been quite as severe as the incident with the chilli. But that did genuinely happen to him.

The whole thing? Including...